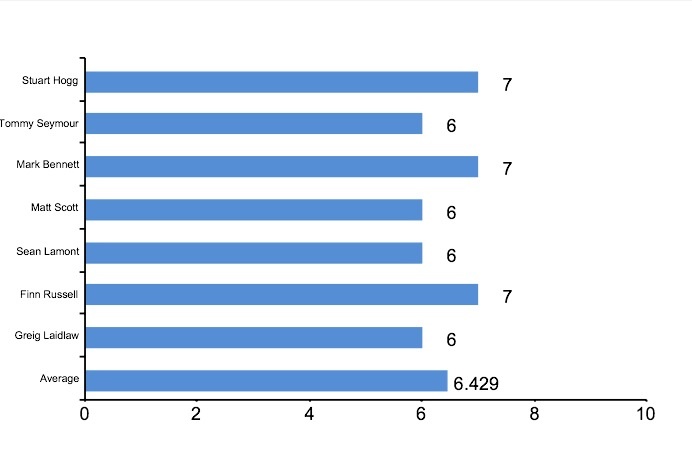 An ultimately comfortable win for Scotland as they opened their RWC campaign but for almost 50 minutes they were tested across the pitch by the Brave Blossoms. So who stood out and enhanced their chances of selection as the tournament progresses? And did it tally up with the pre-match preview?

Stuart Hogg – 7
Deservedly copped the donkey chants after dropping a regulation high ball under no pressure. Scotland struggled to get him involved as Japan held onto the ball for extended periods and rarely kicked to the dark blue back 3. Always threatening on the rare occasions he did get the ball he. Seemed to have a slight knock when he was replaced by Maitland so may be rested at the weekend. Is he in or out for the later pool matches? IN

Tommy Seymour – 6
Made the most metres of anyone but about 80 or 90% of that came from his (extremely well taken) interception! Only touched the ball 3 times on a frustrating afternoon. Defensive work was reasonable although the Japanese Number 8 Mafi gave him the runaround which presented the Cherry and Whites with great field position early in the second half. May hopefully get a busier run out against the country of his birth. IN

Mark Bennett – 7
So classy he makes some Eton old boys look like pig-molesting chavs (oh wait…) Few opportunities to showcase his wares but did enough to show he’s a potential star of the pool, if not the tournament. Will get a few digs for very nearly over-running the tryline but evened it up by bailing out Matt Scott after he missed the initial offload to Russell at the fourth try. It’s remarkable how Glasgow came through in the Pro 12 with both him and Dunbar missing. IN

Matt Scott – 6
Couple of poor decisions and a couple of awful kicks. He was leading the defensive line and considering how passive (controlled?) the line speed was it was pretty disappointing he got caught offside a couple of times (although admittedly Mr. Lacey’s line looked pretty harsh on the replays). His other defensive work was generally very solid – 13 tackles and none missed. Not enough opportunity to see if he and Bennett can really combine but if they do it will be something to behold. 50/50 (Horne)

Sean Lamont – 6
The oldest man on the pitch at the start of the game, he continues to roll back the years as he enjoys an extended Indian Summer. The match was set up for him to assist the forwards in trying to get go forward ball against smaller opponents and he was the one back to get his carries up to double figures. Maybe a few years ago he would have gassed his opposite  number on his first half breakaway but his all-round solidity makes him well worth his place. 60/40 (Maitland)

Finn Russell – 7
Scotland will look for him to exert more control in the later matches and if he gets more ball in his hands he’ll mix his game up more than he did today. The first step has to be for Finn himself to be demanding more responsibility – both in training with the coach and on the pitch with his captain and scrum-half. Started to run the Japanese defence ragged late on and his own defensive work was very good, although it will be more severely tested against Samoa and South Africa. IN

Greig Laidlaw – 6
On the plus side he took control but there wasn’t enough of the Little General taking the game by the scruff of the neck – and of course he’s still putting up far too many pish box kicks! When he was working hard to get to every breakdown and dictate the pace of the game Scotland had some joy around the fringes. There were occasions though when he reverted to slllooowwwiiinnnggg riiiiggghhhttt dooowwwnnn and it’s incredibly frustrating. IN (coach’s choice) 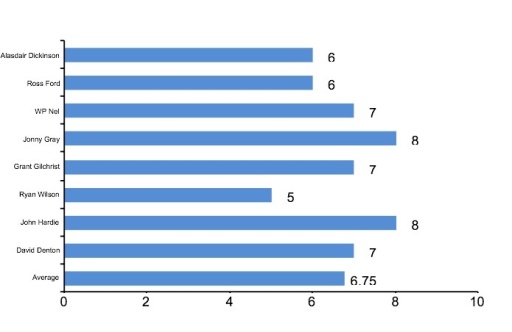 Alasdair Dickinson – 6
In control at scrum time (the penalty he conceded was due to his opposite number folding in at 90 degrees) and topped the front row tackling charts with 18. His defensive attributes and work rate around the rucks will be essential for the coming pool matches. we could do with one of our front rows taking responsibility for communicating with the ref at scrum time but this may not be the role for one of the quiet men of the squad. IN

Ross Ford – 6
The verdict on Ross Ford could probably write itself because his performances are so consistent. So here it is, yet again. Contributed to a solid scrum. Usual overthrow at the lineout (although at least it was an isolated incident). Ineffective carrying. Good work rate in making his tackles but still disappointing that he isn’t knocking folk backwards with some righteous hits. Would have loved to see Rambo running out against the US and putting Fordy under pressure. IN

WP Nel – 7
Seems to have found it quite straightforward adapting to this international rugby lark. The first penalty call on the Japanese LH was a relief because Willem can on occasion get himself on the wrong side of the ref and with Mr. Lacey in charge we were always at risk of his ‘interpretation’. Probably the most effective of the 3 front rows at trying to get over the ball or slow down opposition rucks. Could do with getting out the way of the backs at times. IN

Jonny Gray – 8
As per usual no-one else could touch his workrate. Made the most carries in the forwards (11 – equal with Scott from the backs) and was only 1 behind Hardie for tackles with 20. At only 21 he is the beating heart of this Scottish pack and the amount of graft he gets through gives Cotter options – such as potentially playing 2 offensive specialists together in the back row (Strauss and Denton). IN

Grant Gilchrist – 7
Strange one this. Based on live viewing I felt he was getting through a similar amount of work to Jonny but his stats are definitely a bit lower than I’d expected. After a brainfart of a penalty (he was swung into it by a Japanese player but he’d got himself in a terrible position) he went about his business very well. Helped to keep Scotland’s ruck ball clean and tidy. Will be interesting to see him play the workhorse role if he’s partnered up with Richie v USA. IN

Ryan Wilson – 5
Just not at the races today. Should have been getting his hands on the ball a lot more than he did and he was well behind his back row colleagues in terms of tackles as well. The balance in Cotter’s squad make it seem like Wilson is the best qualified candidate to cover back row from the bench so he’s likely to remain involved. He should probably get a run at 7 against the USA to give Hardie a break and hopefully he can perform like he did in the Pro 12 Final. OUT

John Hardie – 8
So this was what all the fuss was about. At times he was our most effective kick chaser, a very useful ball carrier and of course the top tackler with 21 (couple missed though – Jonny didn’t miss any but of course you knew that already!) Did well to last the 80 considering he had only gone the full distance once before in 2015. Turnovers will be easier to come by against teams who won’t be as efficient at ruck time as the Cherry Blossoms. My man of the match. IN

David Denton – 7
The Japanese generally marshalled him well, realising they had to chop him down before he got up a head of steam. Still he more than justified his selection to start at 8 ahead of Strauss and Wilson. 16 tackles is more than he managed in any game for Edinburgh last season so he’s doing well at upping his defensive output. Very nice turnover (well he got the holding on pen) and could have had another couple on a different day. IN

Fraser Brown – made his tackles with the game under control.

Ryan Grant – scrummaged solidly which was encouraging as Reid seemed to have surpassed him in the set piece.

Jon Welsh – not too much to do for the big man – saving himself for the US.

Richie Gray – racked up more tackles than Gilchrist but should be doing laps for missing that kick off.

Josh Strauss – my feeling is he is just not as effective from the bench but he’ll be delighted to have the first cap done.

Henry Pyrgos – unused, which suggests that he will be starting on Sunday.

Sean Maitland – bit unlucky not to round things off with a sixth try after Mr. Lacey spotted another offside.

So are these ratings too low, too high or just right? Add your thoughts below!