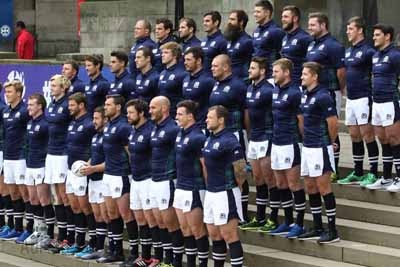 It’s evolution not revolution from Vern Cotter as he seeks to use a better than expected World Cup as a stepping stone to stronger Six Nations showings.

The biggest losers out of the post-RWC shake-up are the 2 Ryans. Ryan G. has been suffering in the scrum of late and with Gordon Reid safely ensconced as Glasgow’s number 1 loosehead he’ll have his work cut out to win his jersey back. Ryan W. has lost his grasp on his place (among other things…) to the superior form of former Warrior John Barclay who will now be the player to provide cover across the back row. Al Strokosch has retired and Henry Pyrgos and Grant Gilchrist have both essentially been selected for the current squad, albeit without actually being fit to play.

That leaves the 3 other injured players:

There were  another 10 players who were part of the extended RWC training squad but are not included for the Six Nations:

Hugh Blake. Early days for the back row / centre who has a decent shot at making the GB 7s squad for Rio. Has real talent and a broad skillset and could have a big future for Glasgow and Scotland.
Hamish Watson. A surprise exclusion from the squad but injuries and a certain John Hardie have restricted his recent game time for Edinburgh. Possibly the best turnover threat in the country so it will be a real shame if he’s not back in contention soon.
Damien Hoyland. Given his try-scoring record and general play this season he’s one of the unluckiest ones to miss out. With Maitland, Seymour and Visser all at various stages of recovery from injury, Vern Cotter has gone for experience and the defensive solidity of Sean Lamont.

Kevin Bryce. He was an injury call-up to the RWC squad (after a temporary spell as cover in the extended squad for the same reason) but is now injured himself!
Mike Cusack. Only 2 appearances for Glasgow this season meant his inclusion was unlikely but given the limited options at tight head he can’t be counted out.
Allan Dell. On the periphery for Edinburgh and as the only player in the training squad who didn’t feature in a RWC warm-up match it might take an injury crisis before he’s involved again.
Rob Harley. Currently injured. As seemingly the only Scottish-qualified specialist 6 his name will definitely be in the conversation for future selection but with Cornell Du Preez coming on board in November as yet another 6/8 he may find it tough to add to his caps total.
Rory Hughes. Needs to really push for consistent game time at the Warriors before he can be a serious contender for further international honours.

Stern Vern has a settled core squad but has shown there is room for players in good form – no matter what their age or experience. Scotland fans will be hoping the side continue to develop and this Six Nations brings a bit less heartache than usual…

Picture as ever courtesy of Adrian Henry. Visit Rugby People for more of Adrian’s fine work.