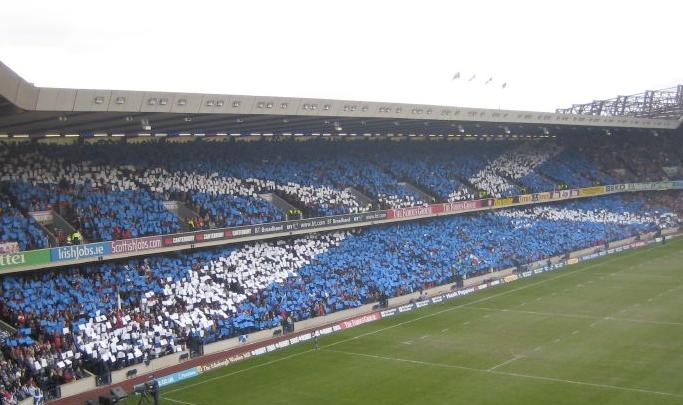 111 days after their World Cup adventure ended in acrimony and an emergency toilet break, Vern Cotter’s side resume their quest to rebuild the reputation of the Scotland rugby team. With memories of last season’s whitewash barely cleansed from their brains by almost 12 months of intensive therapy, Scottish fans will be wary of anticipating too much. But whisper it quietly – the national side have some decent players and some decent coaches. Now they just need to add some decent results to the mix…

Overall
Backs – even.
With a number of players in both backlines still to really find their form post-RWC it should be a close contest. There’s not much bosh but if anything can tip the balance slightly in England’s favour it will be the edge they have in terms of pace.
Forwards – very slight advantage England.
The Scottish front row are coming off a much stronger tournament at scrum time than their English counterparts but overall there’s more physicality in the pack for the Red Rose. In particular Scotland have a lot of catching up to do at the breakdown (where they were the worst Tier 1 side in the tournament at stopping the opposition).
Subs – advantage England
Scotland’s playing resources just don’t stretch as far as their larger neighbour – although the relative lack of experience on the English bench keeps things closer than might otherwise have been expected.

Team Talk
Big Vern Cotter only makes 2 changes from the side that started against Australia – Scott (who would have started but for injury) for Horne and Barclay for Cowan. By contrast Fast Eddie Jones’ team only has 8 remaining from their own match-up with Australia in the RWC, reflecting where each of these nations are in their development.

Previous results
This will be the 9th time the 2 sides have met at Murrayfield in the Six Nations with the head to head looking like this from Scotland’s perspective:

Most recent meeting in Edinburgh:

24 players return from that fixture – 11 for the home side and 13 for the visitors – but fortunately the nematodes have been dropped. 10 of the English starting xv are the same as on that day. With May absent through injury and Lawes on the bench it’s only Wood at 6 and the centres – Twelvetrees and Burrell – who have been omitted, suggesting these have been seen as the problem positions for England. It was only the second time in Six Nations history that Scotland had drawn a blank. Their other scoreless performance also came at Murrayfield, 10 years earlier against France.

Significant stats
Mauls:
Scotland 1/2 (50%) England 13/13 (100%)
Is the maul the new scrum? It’s frequently reviled as an unattractive, time-consuming part of the game that is poorly refereed and tilts the balance in favour of sides who abhor the idea of sexy rugby in favour of milking ‘easy’ points. It does still remain the only facet of the game outside the set piece that ties in significant numbers of defenders and creates space and the fact is it will be the weapon of choice for both these sides from short range on Saturday. Scotland certainly remain vulnerable, although their defence in this area is stronger now, but they’ll also be more willing to test English mettle with their own attempts. Ultimately the best defence against a powerful England pack is strong discipline and not letting them get into position to set up the rolling maul.

Territory
Scotland 34% England 66%
The English side from 1-23 contributed to a performance that absolutely smothered the life out of their Scottish opponents. A near perfect set piece allied to an overpowering maul and winning the collisions at the breakdown kept the Scots’ defence at bay. When the dark blues did have the ball they were met by a white wall – David Denton apart the Scottish forwards averaged less than a metre a time from their 44 carries. This was the perfect storm to keep the home side contained in their own half, reduced to booting the ball to touch to get some relief (England had 24 lineouts). On Saturday Vern Cotter’s men are unlikely to dominate but they need to play a smart game territorially and push the English side back whenever they have the opportunity.

Tackles missed
Scotland 27 England 11
79% tackle completion at any level, let alone in the Six Nations, simply isn’t good enough. 17 of Scotland’s misses came from their outside backs as they conceded ground faster than the Italian Royal Army. Defensive work has improved under BVC but they leaked tries during the RWC. There was still a worrying susceptibility to fast-paced, dynamic backlines (Samoa, Australia) and muscular, route one forward packs (South Africa) – which rather disturbingly sums up the England side (assuming they have the right gameplan and play to their potential). The Scottish side will probably need to make 90%+ of their tackles if they want to beat England for the first time in 9 attempts.

John Lacey was previously acknowledged as the ‘fastest ref in the world’ but gracefully conceded his title after Craig Joubert’s bolt for the bogs at Twickenham. Mr. Lacey will be more familiar to the Scottish players as one of the top Pro 12 whistlers. Given his record of penalising Glasgow this may not necessarily be a good thing…He’s refereed Scotland on 3 occasions with those matches resulting in 2 wins and 1 draw, most recently in the RWC fixture against Japan at Kingsholm.