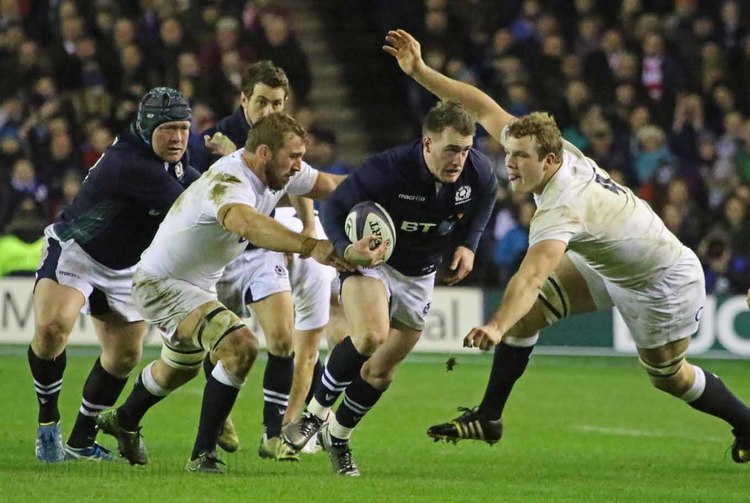 It’s deja vu all over again: try conceded after individual error? Check. Try bombed by player not giving a pass? Check. Outmuscled and overpowered? Check. For Eddie Jones’ first match in charge see Stuart Lancaster’s opener at Murrayfield 4 years ago. All Scottish fans can console themselves with is by looking at how well Lancaster’s reign finished. But it’s really not going to make our side any better…

Stuart Hogg – 7
The best Scottish back by a distance. It may not have taken much to stand out in a sea of (below) averageness but his performance bears comparison with some of his best games in a Scotland shirt.
Sean Maitland – 4
Not enough game time, not match sharp. He was a peripheral figure when he stayed out wide. When he did come inside he made some ground but there were far too many turnovers.
Mark Bennett – 4
Not enough game time, not match sharp. He was the player Scotland would have been looking to create once their ‘chaos’ gameplan had stretched the English defence. This didn’t work out and neither did parachuting Mark straight back in to such a big game.
Matt Scott – 5
The only Scottish back apart from Hogg to test the English line reasonably frequently. Defensively much more solid than some of his recent appearances, including throwing himself into Billy Vunipola on a number of occasions.
Tommy Seymour – 3
Not enough game time, not match sharp. He’s definitely stronger under the high ball going forward that he is defensively but even still this match was a particular horror show. 6 turnovers is as many as he has conceded all season for Glasgow (554 minutes).
Finn Russell – 4
A mixed bag from a player who turns in these kind of performances so frequently he should really be called Liquorice (Allsorts). Good kick / crap kick; great pass / poor pass. You never know what you’re going to get from minute to minute.
Greig Laidlaw – 4
“Get a move on Laidlaw! OK, it’s alright – he’s just taking his time getting to the ruck, weighing up his options so he can shift the ball on as soon as he gets there. Here comes the pass. Any second now. One more look around. Surely now? Ref’s called use it Greig! Backlift and pause and step…Gone. Right – on to the next ruck. GET A MOVE ON LAIDLAW!” Repeat ad infinitum…

Alasdair Dickinson – 5
Not enough game time, not match sharp. Everybody and their dog could see that Dan Cole was binding on Al’s arm and driving him down. Well everybody but Mr. Lacey and his assistants. As a veteran of 250+ games Dickinson really ought to have been able to sort this for himself though.
Ross Ford – 5
Part of the mechanism that lost some crucial lineouts, stalling Scotland’s momentum and killing their chances of good possession in scoring positions. He is what he is but right now Scotland need a ball carrier and turnover threat at 2. Sounds like Rambo…
WP Nel – 5
A disappointing day for the big fella who would have wanted to impose himself on the scrum more. With refs abdicating responsibility he has to find the answers to looseheads who test the boundaries of the laws.
Jonny Gray – 6
His defensive work is beyond reproach – in fact it’s freakish, almost inhumanly close to perfection. The problem for a Scottish side short of a ball carrier is that his offensive work doesn’t provide the sort of dominant go forward they need.
Richie Gray – 4
Not enough game time, not match sharp. It’s somewhat glib to say Richie has slipped back at his club since returning from the RWC – but I’m trying to do this in less than 1,000 words so I’m just going to throw it out there. (And it’s true.)
John Barclay – 6
Did playing two 7s work? Probably not. Did JB find himself in the kind of positions where he could do damage? Not often enough. Would Strauss have made more than 10 metres from 8 carries? More than likely. Is that enough questions? Definitely.
John Hardie – 6
Threw in the strongest performance in the forwards but unfortunately with the English pack imposing their gameplan the Scottish back row trio’s effectiveness was negated. Even the impact of his usual hard-hitting was reduced by an overpowering opposition.
David Denton – 6
Scotland’s most effective ball carrier in the pack. Backed it up with 12 tackles (none missed). But…he didn’t get the ball enough – 9 carries to Billy V’s 22 (Lack of confidence? Poor options by the team?) – and he covered up his lovely hair and no-one wants to see that do they?

Stuart McInally – tried hard but couldn’t outmuscle the English defence the way he can at Pro 12 level.
Gordon Reid – struggled to get to grips at the scrum where the English front row adopted some pretty cute tactics.
Zander Fagerson – got his first cap, first carry, first tackle, first scrum etc. Hopefully many more to come.
Tim Swinson – made his tackles but didn’t contribute where the team was really lacking – effective ball carrying.
Blair Cowan – not wanting to get too repetitive but he added no carrying threat.
Sam Hidalgo-Clyne – unused. Surely was worth a shot to speed the game up?
Duncan Weir – unused.
Duncan Taylor – tried to get involved from the wing but he would have welcomed the opportunity to come on in the centres and might have added a bit of physicality.

The big issue – depth. There were at least 5 players who came into this short of match practice and not sharp enough to jump into such an intense game. There were probably another 2 or 3 who haven’t shown much form since the World Cup. If Scotland had any real depth then some (or all) of these players would not have started. As it was there were still big drop offs to the Scottish replacements (compare and contrast to most of the English subs used). Big Vern Cotter needs more options (or for no more injuries at any time, ever).

For the avoidance of doubt:

Picture as ever courtesy of Adrian Henry. Visit Rugby People for more of Adrian’s fine work.