Six years ago today Glasgow hosted their very first home PRO12 playoff match at a packed Scotstoun stadium. The Warriors had won 18 games during the regular season, including eight in a row leading up to the semi-final. A lack of bonus points though meant a second place finish behind leaders Leinster and a visit from another Irish powerhouse – Munster.

It was a match played at an intensity not witnessed before at Scotstoun, but with three previous playoff appearances behind them the Warriors were ready. Despite falling behind to an early Munster try, by halftime the home side had carved out a narrow lead. Their hard work was to provide even greater rewards as Gordon Reid shoulder shuffled over for a score just six minutes into the second period. From there on it was tension all the way for those in attendance and watching at home. Munster closed to within 4 points with half an hour to go, then cut the Glasgow lead to a single point with 14 minutes still to play. The defensive effort was heroic but with just five minutes remaining any kind of score for the men from Cork would have ended the Warriors’ season…

It’s Munster ball, as it will be for almost the entire remainder of the game, and they have a scrum just outside their 22. Glasgow may not have possession but they’re in the area of the field where there is no risk of a kick at goal and they can make it a long, hard grind for their opponents to get into a scoring position. The crowd are hugely invested in the game. Like every break in play during the closing stages of the match this one is filled with “Glasgow, Glasgow” chants sweeping round the stands as the supporters try and give as much energy as possible to the players.

Big Bad Bob Watch – the Ginger Ninja is playing openside at the scrum with Sean Lamont – who came on for Chris Fusaro after 72 minutes – doing his emergency blindside flanker routine (the Reverse Richie Vernon as it’s known in the trade).

The Glasgow defence is set up to contain, allowing Munster to move the ball wide from the scrum and pick up some easy yards but they never threaten to breach the defensive line and Sean Maitland is more than happy to simply guide Ian Keatley into touch with the minimum of effort.

Big Bad Bob Watch – he’s in close attendance to mind Ruaridh Jackson who gets in a tangle with the Munster players (and by all accounts Conor Murray’s ‘attentions’ are best avoided unless you have a packet of wet wipes handy…) before stepping in at scrum half for the ensuing lineout.

The throw-in just inside the Munster half is unsurprisingly slow – cue much waving of arms from Paul O’Connell, who probably would have taken at least twice as long if his side were in the same position. The tap down is way off target though and despite Niko Matawalu tidying up, the ball is knocked on and Munster have a scrum just inside the Glasgow half. This is not where the home side want to be with just a single point lead to defend.

The ball is slow to emerge and it’s a blessed relief for Glasgow fans when it does without the usual scrum penalty lottery coming into play. From there it’s more side to side action for the visitors as they try to find some hint of a gap in an oppressive Warriors’ defensive line.

Big Bad Bob Watch – he’s off the scrum, trailing the play until the opportunity comes to make a hit – whereupon he takes his chance to launch future Warrior, James Downey, backwards prompting an intensifying of the roar from the crowd.

The tackles are flying in – Tim Swinson is next, swinging a red-shirted Munsterman to the floor and then it’s back to…

Big Bad Bob Watch – a cautious Harley makes sure he brings down Simon Zebo who is buzzing along the line looking for space or an opportunity to release a midfield runner on a strong line.

Leone Nakarawa drags another Munster ball carrier backwards – the Irish side have gone through 7 phases and have lost ground from where they started.

With the ball yet again on the move from one touchline to the other comes the moment that sets every Warriors’ fans’ pulse racing – JJ Hanrahan tries to float a pass out but Tommy Seymour anticipates it brilliantly and intercepts. A momentary slip as he pulls the ball down checks his progress a fraction and Simon Zebo manages to get back with a desperate cover tackle less than 10 metres from the Munster line. Tim Swinson comes in with the biggest clearout of the day to help keep the ball alive as Glasgow try to work through the phases and power their way over the line for what would be the clinching score. The crowd redouble their efforts, increasing the volume again, hoping to propel the ball over the line by sheer force of will.

Big Bad Bob Watch – it’s back to the bread and butter for Rob Harley as he helps contribute to clearing out five rucks in quick succession.

Just when it seems like the Warriors could play out time in this corner Mr. Mitrea blows his whistle. It’s one of those moments when, for an instant, due to the chaos on the floor no-one is certain who the penalty is for. Which way is the ref’s arm going? Is this the decision that will seal the match? Instead there’s a collective sinking feeling as it becomes clear the penalty is for holding on. Munster will get one last possession.

Munster boot the ball from close to their own line up towards halfway. Glasgow are on high alert – to the point that Leone cuts off the ball boy’s attempts to give the ball to the visitors’ hooker! The men in red are slow to set up – possibly realising they only have one play left anyway, possibly due to fatigue and the clock reads 79:42 as POC calls the lineout (unsurprisingly) to himself.

Big Bad Bob Watch – he’s on overwatch at the back of the setpiece alongside Pat MacArthur and Sean L., itching to get out into the Munster line and solidify the defensive effort.

Big Bad Bob Watch – there could be only one and of course it’s Rob who stops Earls from getting clear.

With time expiring (79:57 on the clock) Munster are on halfway. A penalty conceded could give them the chance of a long-range shot to win the game. More likely they need to work themselves 25-30 metres up the pitch for a decent drop goal attempt. The simple fact is Glasgow know if they concede now the game will be lost.

The intensity is there, the desperation to stop Munster in their tracks. Leone is up off the line to prevent BJ Botha from shipping the ball on. Sean L. is living and breathing his role as a flanker, chasing the turnover that would end the game at every ruck he contests. The tackling throughout the side is frenzied and drives Munster back into their own half of the pitch. There’s a constant wall of sound now, rising and falling with Glasgow’s pressure on the ball and their opponents.

Big Bad Bob Watch – the hitting maestro joins Jonny Gray for a double tackle, uniting the only two Glasgow forwards to play the full 80 minutes and who will combine for 32 tackles between them.

Just for a moment the ball spills loose from a Munster ruck – Tim thinks he can get there and launches himself Superman-style over the breakdown but the ball just evades his outstretched fingertips. The Warriors are hunting in packs down now, running down every red jersey. Even though they recover the ball Munster are being pushed deeper and deeper.

The coverage briefly cuts to Gregor Townsend, out of his coaching booth, nothing left that he can do to influence the game. The most laidback man in the history of Scottish rugby is stressed to the limit, playing every second, making every hit, anticipating every Munster thrust before it happens and praying his players have the same awareness.

Leone is counter rucking on the Munster 10 metre line, tying in more bodies, slowing the possession even more before the referee warns him off and Murray can get the ball away. Alex Dunbar screams up off the line forcing Munster to pass deep to Zebo, so deep in fact that he’s only three or four metres from his own 22. He does have space but Ruaridh takes his ankles forcing the visitor’s most dangerous runner to ship the ball on.

Big Bad Bob Watch – Glasgow’s number 6 is loping across, the closest forward to the action developing down the Main Stand wing on the Scotstoun pitch. His presence allows Tommy to bypass Hanrahan and slide over to cover Andrew Conway. The Munster player is running down the five metre channel, incredibly close to the touchline where the coaching staff and 30 or 40 Glasgow players are massed, just waiting for the final whistle to blow.

The final moments are chaotic. Tommy’s slipping as Conway tries to step back into the field of play – but there’s no way he’s letting his man go.

Big Bad Bob Watch – Rob Harley throws every last bit of energy he’s got into this final tackle situation. There’s a shoulder, some arm and quite possibly a bit of face in there as he dives into the contact.

Peter Murchie has stepped up from full back and joins the hit as the Munster substitute is engulfed by black shirts. Conway is brought to ground and grabbed, rolled, dragged, pushed towards touch. He tries for a desperate offload but there’s no space, no time to think now as Niko and Geoff Cross arrive to set up the next line of defence.

The ball is fumbled and almost seems to hang for a minute – before it falls over the touchline, almost at Toony’s feet. The noise from the crowd hits peak Weegie as nearly 10,000 fans are out of their seats roaring their acclaim for their heroes.

On the field the coach is jumping around like a lunatic; Tennessee Tam is going off his head; the Scotstoun Express is bear-hugging anything that moves (and keeping an eye out for a bottle of booze to knock); Leone is praying; Sleepy Sean looks like he’s just out for a stroll of an evening; and mad magician Niko is leading the craziness.

Big Bad Bob Watch – and then the iconic image of the night, of the season even, flashes up on the big screen. In amongst all the unconfined jubilation a giant, ginger warrior strides across the pitch. There’s blood everywhere – it’s hard to be sure where it’s even coming from – but as a huge smile spreads across the face of probably the most serious member of the Glasgow squad it’s clear that Bob Harley is surveying what he has wrought – and he approves… 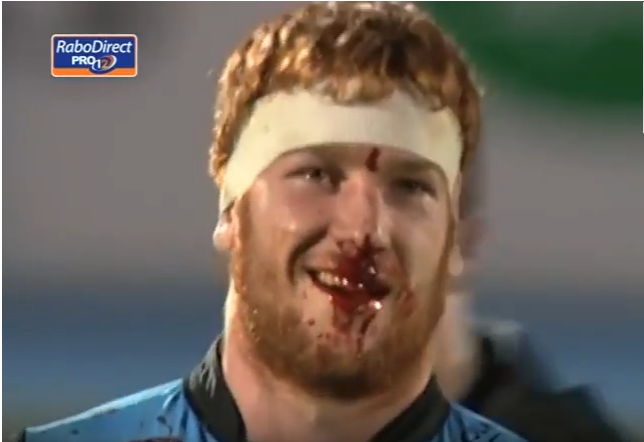