Saturday’s encounter with England may have been a disappointing one for Scotland but their match with Italy on Wednesday still gives them the opportunity to do something the national side’s u20s have never previously managed in this tournament’s history – win 2 matches in the pool stages.

Based on projected wins for Scotland, Argentina, Ireland, New Zealand, South Africa and England the final overall standings will look something like this: 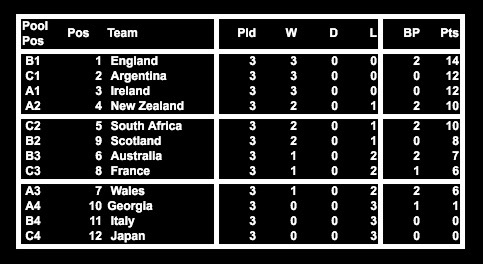 From a Scotland point of view that would mean a rematch with Australia with South Africa and France on the other side of the 5th place playoffs.

In the the battle for the Championship this scenario would also provide a tasty encounter between the two heavyweights of this level, pitting England against New Zealand – a match-up that has been the tournament finale on four previous occasions – and guarantee a first time finalist in either Argentina or Ireland.

A win against Italy is absolutely essential. A try bonus point at this stage is unlikely to have any impact on the team’s position in the final standings so John Dalziel can send his men out aiming to come away with the victory by any means necessary.

Four (or five) points from the final pool match will almost certainly send Scotland into the 5th to 8th place playoffs for only the second time in the history of the Championship. There is though still one nightmare scenario that could see the young Scots win against Italy but still end up in the bottom tier and playing for 9th to 12th: