Glasgow’s most expensive acquisition of the summer wasn’t a replacement for Leone Nakarawa or Taqele Naiyaravoro but instead a much needed upgrade to the Scotstoun turf, bringing in a fully synthetic 3G surface. While OTOTM regrets the lack of blog material this change is likely to bring (seriously – a couple of thousand words talking about postponements, the Murrayfield meltdown and the relative merits of other venues!) the reduced risk of having games called off and/or moved is more than welcome.

An idle summer’s musing prompted a kernel of an idea though – the expectation is that regularly playing on a synthetic pitch means the home team is at an advantage, but what impact is splitting time between the two surfaces likely to have on a club’s away form? Can the reduced preparation on grass cause a decline when a side travels? The Warriors are not the first club to move to artificial turf of course and it’s clubs like Saracens, Cardiff Blues and Newcastle that can provide some data to support this hypothesis.

It’s important to try and compare like with like of course. Simply taking away form after the change may be masked by the team’s overall performance getting better or worse. In order to try and get a handle on whether there is an impact the relationship between wins at home and away and how these have moved would appear to make for a useful comparison. Here are the relative winning percentages, in their respective leagues, for the three sides before and after their switch to 3G: 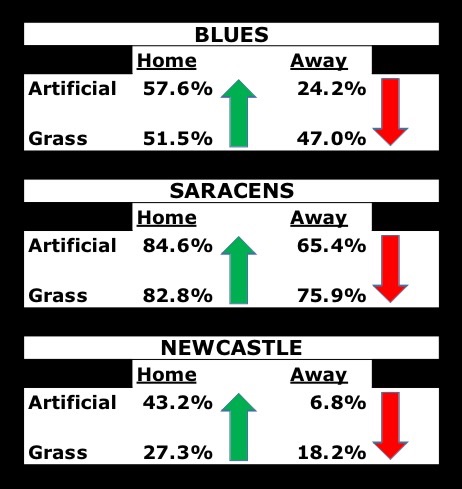 So all three teams have seen their home form improve, winning matches at a higher rate after the installing an artificial pitch, while simultaneously undergoing a drop off in form in away fixtures…which at least gives some credence to the initial conjecture.

So what might be happening here? There’s the issue that players and coaches will need to consistently prepare for regularly playing on both types of surfaces and be able to switch back and forth effectively. Their visitors can afford to just treat it as a one-off with a concurrently limited impact on their season. Glasgow are in the fortunate position of having access to both grass and 3G for training on at the Scotstoun campus which should hopefully allow Gregor Townsend to mitigate this risk somewhat and ensure ideal preparation week in week out.

It’s also possible that players may have to get used to using different equipment. It will come down to personal preference but it’s likely that many in the Warriors’ squad will currently be experimenting to see what feels best, gives them the best speed and traction and provides durability on a high friction surface (and from Nathan Bombrys’ POV doesn’t ruin that very expensive surface that’s been installed over the summer!)

There is undoubtedly going to be a lot of excitement and focus on the new pitch. It will be important that everyone involved remembers that, in terms of performance for Glasgow, marginal gains are likely to be the order of the day – they have won 28 out of their last 29 at Scotstoun on a varying of surface. Toony will be looking to ensure that the focus isn’t all on the 3G when the big improvements can be made by lifting away form closer to the levels enjoyed at home.

The real benefit of the newly installed artificial grass will be the consistency of getting games played and on a reliable surface. Hopefully previous seasons’ issues with multiple fixtures postponed and moved to other grounds will be a thing of the past. It’s then up to the coaches, players and fans to do their bit to ensure Scotstoun remains a fortress and the club continue to improve wherever they play.