Glasgow have played more than 2 hours this season (140 minutes in total) shorthanded after a raft of sin bins and red cards. This is not a new issue – On Top Of The Moon took a look at discipline early on in the 2015/16 campaign – but it’s one that’s worth revisiting due to the impact on the Warriors’ performances and results.

Glasgow have only once managed back-to-back games without a card in the last 10 months. Having managed to avoid the wrath of Nigel Owens against Munster, they take on Racing 92 this weekend, knowing that they need to match this ‘achievement’ given that keeping 15 men on the pitch is essential if there is to be any chance of victory.

Since the start of the 2015/16 season the Warriors have played 41 matches. In that time they have received 31 yellow cards (with 2 of those in the same game for Langilangi Haupeakui leading to a sending off) and 2 straight red cards. The incidence of serious foul play / getting on the wrong side of the referee appears to have increased dramatically over recent years.

Glasgow currently have the rock bottom, dead last, worst in the league record in the Pro 12 for this aspect of their play. They have received the most cards in total by a distance (12 with the next highest being 8) representing a card for every 6.3 penalties. Basement-dwellers Zebre are the only other side to with fewer than 10 penalties per card (9.3). The league average (excluding Glasgow) is 17.5 penalties per card. At the other end of this theoretical table, Munster have conceded 90 penalties in 2016/17 but received just a single card…

This doesn’t appear to be an issue that can be attributed to general discipline. The Warriors have actually dramatically improved their overall penalty count from last season. In 2015/16 they totalled 240 penalties (10.9 per game) the worst in the league. This season they have conceded just 76 penalties – at 7.6 per game the fewest of any side in the Pro 12.

In fact this imbalance between penalties conceded and harsher sanctions appears to be a problem for both Scottish sides. Across the league the number of penalties per game conceded is very similar for all 4 of the Pro 12 nations…

…but the number of penalties per card show some significant variances…

With just 4 of the 32 cards coming for persistent infringements or an accumulation of offences it has been more about quality than quantity for Glasgow when it comes to the offences committed. Here is OTOTM’s breakdown of the where, the who and the why of the Warriors’ card games:

By area of the game

Tackling is by far the worst area for Glasgow – but then they have attempted 4,420 tackles in that period! 15 still seems an awfully high number to get so badly wrong though. The on field sanctions can be broken down further as:

Accounting for almost half of all the cards received this is definitely an area ripe for more precision, better decisions and, just maybe at times, presenting a better picture to referees… 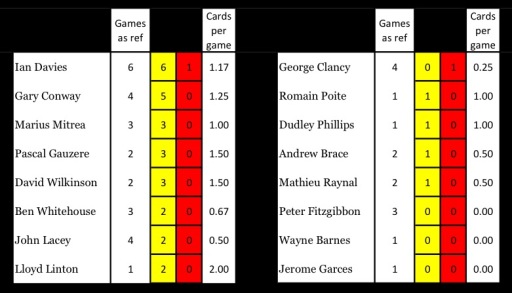 It’s clear that Glasgow have managed to wind up almost every match official they have met across the past year and a half, although with 6 sin bins, a crucial red card and 3 penalty tries Mr. Davies definitely seems to be some kind of refereeing bad luck charm for the Warriors. (NB after the home game with Munster, Nigel Owens should also be on the list as 1-match ref with no cards issued against Glasgow).

Leonardo Sarto and Langilangi Haupeakui share some sort of bizarre perfect record whereby the only penalties they have conceded in Glasgow colours have seen them sin binned. They’re closely followed by Brian Alainu’uese who has only once managed to give up a penalty without some kind of additional sanction.

Ryan Wilson’s record is actually made up of 4 very different offences: persistent infringements (by the team) at rucks; taking man in the air at a lineout; ‘dangerous’ tackle; not back 10 at a tap penalty. Pat MacArthur by contrast has seen yellow for 3 tackle offences (2 high, 1 late).

Of the 48 players not to receive a card during this period, Jonny Gray has the longest streak with 1,755 sin bin free minutes under his belt. At his current rate of progress that would be enough time for Brian to collect 38 cards…

As can be seen above, with the exception of the bad boys trio of Taqele Naiyaravoro, Stuart Hogg and Leonardo Sarto, the backs rarely involve themselves in the sort of behaviour that is likely incur the wrath of the match officials.

With the back row the most likely to end up on the naughty step, if Gregor Townsend was to take disciplinary record as the deciding factor in selecting his trio for Racing 92 they might line up something like 6. Harley 7. Fusaro 8. Strauss with just a single yellow card among them.

Here is the full list of offenders, from Grayson Hart’s debut tip tackle to Brian Alainu’ese’s rush of blood against the Ospreys (click for larger version): 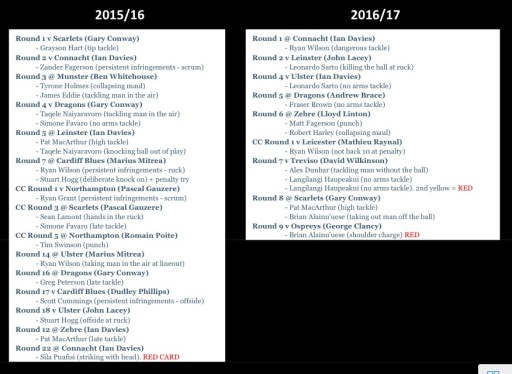 Glasgow twice managed streaks of 6 games with no sin bins during the 2014/15 season. With both their European and Pro 12 campaigns on the line across the next 2 months a clean slate when it comes to cards could give them the extra edge they need to win what are likely to be some very close matches. The side simply cannot expect to hand their opponents advantages like this and pick up the results they so desperately want.

Notes on analysis:
For the purpose of the breakdowns above Langilangi Haupeakui’s on field sanctions against Treviso (which were rescinded by the Pro 12 Disciplinary Panel) have been included and treated as 2 yellows to differentiate from the 2 straight reds received by Warriors’ players.

Credit to the Cardiff RFC Fans site for the stats on penalties and cards conceded by the other sides in the Pro 12.