The permutations are pretty simple for Glasgow this weekend – win and they are through to the quarter finals. That’s about it really…

Still here? Well there are a couple of unusual scenarios it’s probably worth considering. Here are this week’s fixtures marked up with the outcomes most favourable to the Warriors: 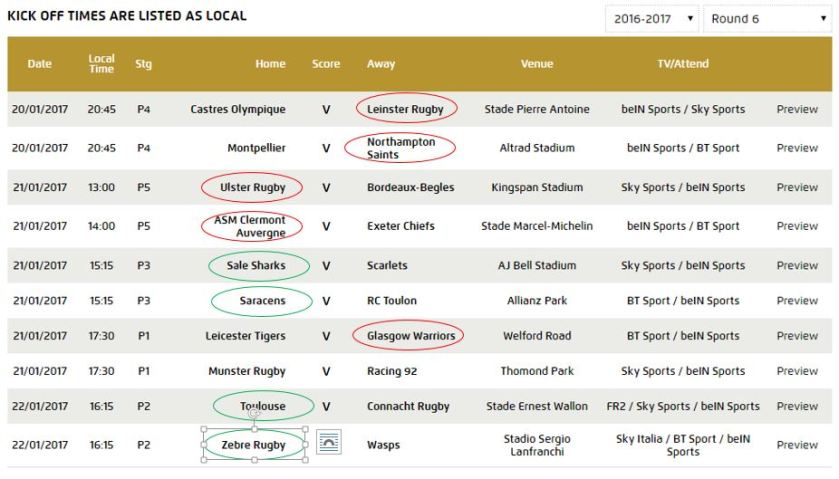 Through without a ball kicked in anger

It is still possible (although as improbable as a straight put in to a scrum) that Glasgow could have qualified for the last 8 even before their match kicks off at 5.30. The required sequence of results goes a little something like this:

If all those outcomes came to pass then the second placed sides in Pools 4 and 5 would have a maximum of 13 points. They would therefore still be behind Glasgow before kick off at Welford Road meaning the Warriors would be through no matter what happened in their own game.

The fixture that stands out on that list is Montpellier v Northampton where an away win seems implausible. A Montpellier victory would put them on either 15 or 16 points. Glasgow’s task then becomes making sure they overtake either Montpellier or Toulon (assuming the French giants lose their last fixture to Saracens in the 3.15 kick off) by picking up sufficient points against the Tigers.

Glasgow have already played Munster 3 times this season with the away Pro 12 fixture still to come – and even the possibility of meeting in the league playoffs. Here’s the sequence of events that sees Glasgow add yet another visit to Thomond Park to their travel itinerary:

As one of the group runnners-up the highest seeding Glasgow can achieve is 6th – although the balance of probabilities points to 7th being their placing it they qualify. Munster look a safe bet to get a BP win against Racing 92 and are most likely to finish as the 3rd best of the pool winners.

With the quarter finals in the format 1st v 8th, 2nd v 7th, 3rd v 6th and 4th v 5th chances are the 2 sides will avoid each other. But if Munster move up to 2nd, or if Glasgow make it into 6th they may well do battle once again.

Munster finish as 2nd seeds if:

Glasgow finish as 6th seeds if:

If one of these scenarios comes to pass then Glasgow will travel to take on Munster in the Champions Cup on the weekend of 31 Mar/1 Apr/2 Apr – and then return to Ireland to take on the same opposition in the Pro 12 one week later!

It’s also maybe worth mentioning that assuming the 2 sides finish as 3rd and 7th seeds as originally predicted, they are still on the same side of the draw that is scheduled to meet in the semi-final…