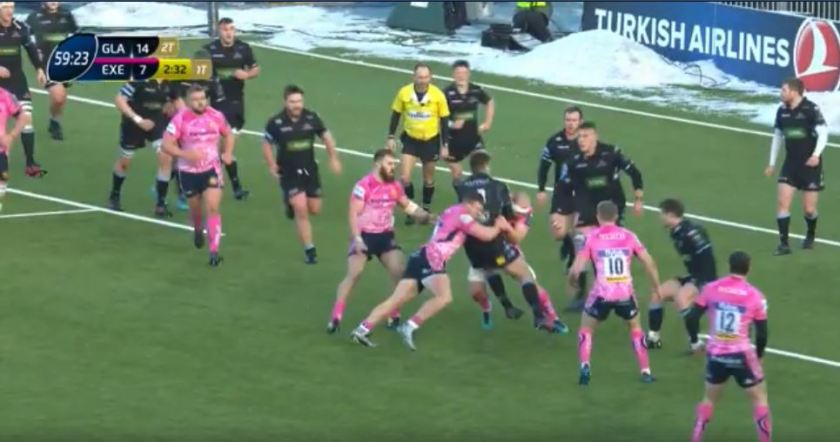 Saturday’s game was a strange one for Glasgow. With nothing to play for in terms of the European Cup itself the side were left to motivate themselves with thoughts of finishing strong in front of a home crowd before the squad split for international and domestic duty. There was also the not insignificant matter of showing what the club were actually capable of after struggling in the earlier rounds. A 3 minute burst midway through the second half perfectly illustrated the style, tempo and skill levels the Warriors can bring to the table as they scored not 1 but 2 of the best tries of the season.

How quickly can a game change?

One of the (many) remarkable things about Glasgow’s 3rd try against Exeter was just how swiftly the momentum transferred from one team to the other. The Warriors had just lost Leo Sarto to a shoulder injury and, having collapsed a maul, were penalised and pushed back deep into their own 22 by Gareth Steenson’s kick.

With 58.44 on the clock Luke Cowan-Dickie was throwing into the visitors lineout just 7 metres from the Warriors’ tryline. 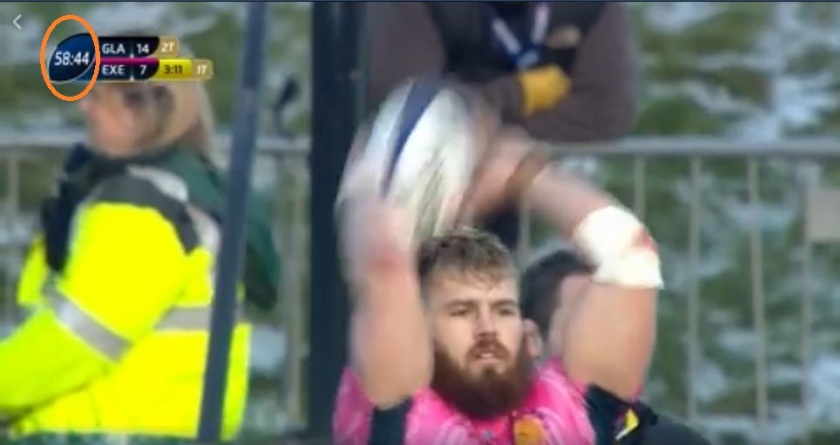 60 seconds later Tommy Seymour was touching down at the opposite end of the pitch. 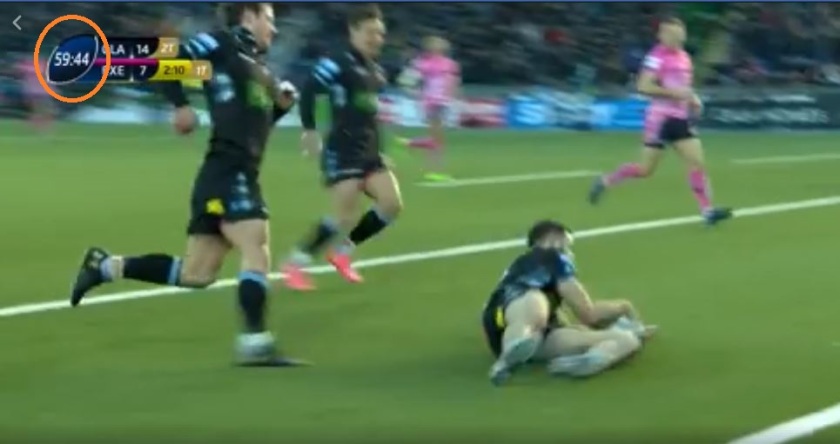 In between the Glasgow forwards managed to win possession of the ball by driving an Exeter maul into touch – and the backs followed up by tearing apart the visitors’ defence after a single ruck from the resulting lineout. It actually took Finn Russell more than twice as long to kick the conversion (60 seconds) than it did for the try to be scored (23 seconds from Glasgow’s lineout throw-in to touchdown).

On 59:21 Grant Stewart threw long over the top of the Glasgow lineout where Huw Jones managed to collect the ball – despite it bouncing first. This is the point that shows just how sometimes seemingly insignificant actions can have as much impact as the ‘big’ moments in games. If Huw didn’t take that ball no-one would have been sitting thinking “well that’s a try-scoring opportunity gone begging” but that’s exactly what would have happened. Games and results are built on 100s of these little moments as well as the more obvious things like a 2-on-1 being blown or a missed tackle with no covering defender.

This is heads up rugby…

The genesis of the try arrived while Huw Jones was still being wrestled to the ground by the Exeter tacklers. Coaches often talk about how they want their players to get their heads up and play what’s in front of them. Actually living that mantra though is not that easy and there are many players who are much happier knowing in position x you do y. Finn Russell is definitely not one of those men. Despite being pressed back onto his own goal line he was scanning the Exeter defence and spotting they were overplaying the kick. In particular their backs had all either retreated or shuffled over to the open side of the pitch.

Stuart Hogg was just behind Finn – a quick wave of the hand from the stand off and they were both on the same page to start the move that went:

Both Glasgow’s tries in this spell featured superb support work from backs and forwards. Even the Warriors’ first try, right at the start of the game, demonstrated how hungry they were with Stuart Hogg quickly spotting the mismatch on the blind side that Finn Russell was looking to exploit. The full back sprinted from deep to get into the right position to take the scoring pass:

On the Seymour try, Tommy himself was the man who broke out of Glasgow’s 22 before passing the ball inside. Just after that he was bumped by an Exeter defender and almost brought to a standstill. After his initial burst he was nearly 10 metres behind the ball as Hogg stretched away down the wing.

As Tommy saw the play developing ahead of him though he realised more support might be needed. There was a visible acceleration as Hoggy was being chased down by Woodburn. By the time George Horne and his dancing 7s feet were making Lachie Turner live up to his name Tommy was closing in fast. When it was time for the offload to be made he was in the perfect position to receive it.

It wasn’t just Tommy though – (the admittedly fresh on the pitch!) Lee Jones travelled all the way from the opposite wing to be a realistic option for the final offload; substitute hooker Grant Stewart, in only his 2nd pro game, never stopped running and trailed the play all the way from his own line deep into the Exeter 22: 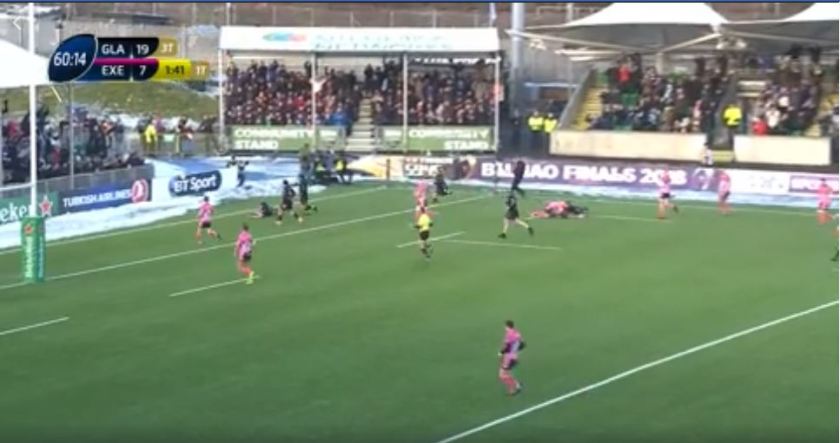 After the breathless excitement of an outstanding try, Gareth Steenson kicked off with the clock showing 61.09. Just 25 seconds later he was heading back under his own posts again after another spectacular Glasgow score.

Again all it took was one ruck with the other Jones (Lee) being the man to catch the ball and take the tackle. Again Russell had his head up assessing the defensive line-up (notice though that Hoggy had his back to proceedings at this point [checking out the East Stand Massive?] but it didn’t take him long to cotton on to what was happening!)

Once Grant Stewart realised he was best to put a pass out the back and let the fast lads get on with it the play was dominated by that Russell – Hogg – Seymour – G. Horne axis again. George’s big brother Pete joined the fun as he provided the link to get the ball back in field into space.

Just to prove it wasn’t all about the backs though one of the best bits of support play came from back row Matt Fagerson. He chased the play from being the first man on Hogg’s shoulder when he got the initial pass all the way into the Exeter 22. Zander’s wee brother still had an awful lot to do when he got the ball from George Horne (who was maybe hoping for a quick 1-2 and the chance to bag yet another score). Matt set up the defenders with a bit of the dancing feet himself to start with but quickly decided to revert to the straightest possible route to the line. The agricultural approach paid off as he crashed over despite Woodburn trying to jump on his back…

In the space of 2 minutes and 13 seconds Glasgow scored 12 points (with a simple conversion to come) while Exeter only touched the ball once (and that was the kick-off to restart after the Seymour try). It was a lesson in how ruthless the Warriors can be when they identify opportunities and then execute their skills at pace. Dave Rennie will want to see much more of this as the PRO14 campaign starts to ramp up over the coming months.