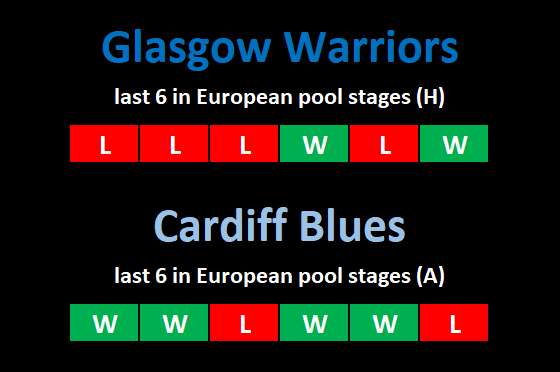 The two sides are taking very different ambition levels into this game and that’s reflected in their selections. Glasgow know they can keep qualification for the knockout stages almost entirely in their own hands and have picked 10 of the 15 that started the previous European game against Cardiff Blues. Overall 17 of the matchday 23 return with most of the absentees being down to injury.

The visitors are not in the running for the quarter finals and just 3 of their starting XV from the game at the Arms Park return (12 of the matchday 23). They may have one eye more on league business but there’s still plenty of talent in the Cardiff Blues lineup which is packed full of young players keen to grab their opportunity to impress.

Almost 5 years since he made his pro debut for Glasgow, Kevin Bryce should finally get to play in the Champions Cup. The hooker / TH prop / LH prop will be the 230th player to feature in this competition for the Warriors. The game will also give Brandon Thomson his first ever European start.

Eight and a bit years after his Glasgow debut against Leinster at Firhill Robert Harley will become the first player ever to make 200 appearances for the club. Warrior number 188 has been a consistent presence for the club through nine strong seasons (so far) in which he has never given anything less than maximum effort for the cause. Big Bad Bob will also be playing a record 42nd Champions Cup match for Glasgow – taking over from Gordon Bulloch as the club’s most capped played in this tournament.

There are more big numbers for another player who made his debut in that same match against Leinster at the start of the 2010/11 season. Ryan Wilson will play his 150th game for Glasgow. The co-captain is one of the spiky characters who have helped maintain the Warriors’ transformation from soft touches which really began when former skipper Al Kellock joined up 4 seasons earlier.

It only seem fair to give that man Rob Harley another mention here – simply because his achievements are so remarkable. He’s only played during 9 of the club’s 23 seasons but he’s been a teammate of 145 of the 300 other men who have pulled on a Glasgow jersey over the years. The big lock / back row is one of the players who still connects the current generation to the growing pains of a decade or so ago.

During the game attention will almost always be on where the ball is but if you get the chance take a couple of minutes just to focus on the work Rob gets through. Around the breakdown he’ll be in near perpetual motion, making tackles, back to his feet, disrupt the ball, move out to strengthen the defensive line. His relentless efforts are appreciated and hopefully there are plenty more games to come as he sets new records for the Warriors.

…at home against Welsh sides in the pool stages of the European Cup:

Most recent meeting in Europe:

Glasgow have yet to win the penalty count in a game that Mr. Doyle has taken charge of. The English official (by way of his country of birth, Ireland) has in the past taken a particularly dim view of some of the Warriors’ scrummaging. He doled out no less than 13 penalties against Glasgow props in two Champions Cup games in 2013/14 and 2014/15. Fortunately the home side’s setpiece has improved somewhat since those days but it will still pay to be wary about getting on Mr. Doyle’s wrong side in this area of the game.