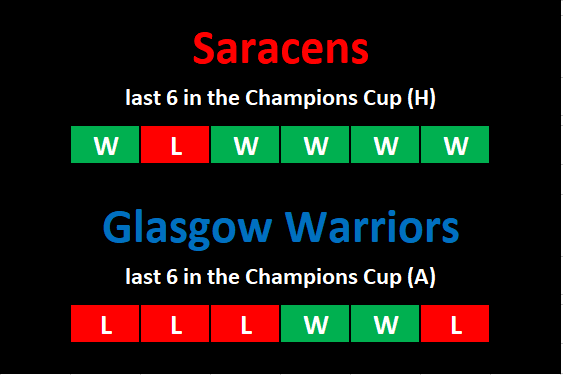 Ten weeks since these two sides met in the final round of the pool stages they’re back at it again at Allianz Park. Glasgow have 8 new faces in the starting XV from that game. Steyn, McDowall and Hughes are in the backline for Seymour, Grigg and van der Merwe. Brown, Fagerson, Cummings, Gibbins and Fagerson join the pack in place of Stewart, Halanukonuka, Gray, Fusaro and Wilson.

Saracens bring in Farrell (who was a late call-off from the previous match), Maitland and Lozowski in the backs for Lewington, Strettle and Tompkins. There are 3 more changes in the forwards with Barrington, Judge and Skelton starting for M. Vunipola, Koch and Burger.

After a flying start to his Warriors’ career Kyle Steyn will make his European debut for the club. The wing / centre may only have 4 games behind him but his form has been such that his selection for such a crucial match is fully deserved.

Tim Swinson will make his 100th start for Glasgow. Of the 44 Warrior Centurions just 18 have made it to 100 starts before the former Newcastle Falcon (although both DTH van der Merwe with 99 and Chris Fusaro with 97 are also closing in on that mark).

Jonny Gray will make his first Warriors’ appearance from the bench for more than 4 years (the last occasion was away to Leinster on 27th March 2015).

It’s hardly a revelation to suggest that the teams’ respective stand offs will be hugely influential on Saturday. Adam Hastings will get the chance to test himself against one of Europe’s premier operators in the 10 shirt. Can he channel the spirit of Finn Russell and leave Owen Farrell bamboozled for the second time this month?

No-one has more try assists for Glasgow this season than Adam (8 – tied with George Horne). Chuck in his own brace of 5-pointers and then look at the space that he’s created for others through his passing, footwork and deceptive strength and it’s clear that he’s thriving on the responsibility of being the number 1 number 10. When Stinger plays well, Glasgow play well. The Warriors need his best ever performance on Saturday.

…against English sides in the European Cup:

Most recent meeting in Europe:

Despite Mr. Owens being one of the PRO14’s top referees and Glasgow one of the league’s top clubs this will actually be the first time the Welsh whistler has taken charge of a Warriors’ match this season.

The club have plenty of previous with Mr. Owens’ though – this will be his 35th time refereeing Glasgow. His officiating style is very much based around helping the game to flow. If the Warriors can avoid the breakdown being turned into a quagmire and keep the ball moving quickly then the referee’s tendencies could assist with their fast, open gameplay. That is a pretty big if though…