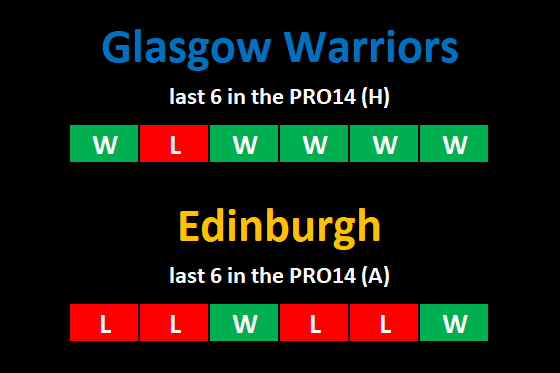 * 1872 Cup debut for Edinburgh – JB of course has 10 appearances in this particular fixture for Glasgow. His last Cup match was on 1 January 2012 at Firhill when the Warriors won 17 – 12.

Glasgow fans get to welcome back Ryan Wilson after a 104 day absence from Scotstoun. The skipper will be in the unusual position of coming off the bench. It will be two days short of three years since he last did that for the Warriors. On that previous occasion he replaced Leone Nakarawa for the final 2 minutes during the big Fijian’s last home appearance for the club.

The likes of James Johnstone (Glasgow EDP); Tom Gordon (Edinburgh’s Academy); Ross Ford (contracted to Glasgow); Fraser Brown (contracted to Edinburgh); and Charlie Shiel (pre-season friendly for Glasgow) have been on the alternative side of the M8 divide from their current location without ever making a competitive appearance for the other team. Basically there is a heck of a lot of crossover between Scotland’s two pro sides!

Two of Scottish rugby’s most in form players celebrate significant milestones with Hamish Watson playing his 100th game for Edinburgh and Sam Johnson featuring for the 50th time for Glasgow.

Tommy Seymour and Stuart McInally will both be making their 100th appearances in the PRO14 on Saturday. Tommy’s first 7 games in the league came as an Ulster player back in 2010/11. In a nice bit of synchronicity his last match for his former side (in what was then the Magners League) was against Glasgow at Firhill. His first appearance for the Warriors was 5 months later – against Ulster at Ravenhill!

Warrior to Watch / Edinburgher to Eyeball:

Gregor Townsend must thank his lucky stars that he has two hookers of the class of Stuart McInally and Fraser Brown to select for Scotland duty. In recent times it’s been Rambo who has mostly worn the number 2 shirt for the national side with Fraser coming off the bench to ensure there’s no real drop off in quality.

The two skippers will go head to head for the first time this season. Stuart was at his rampaging best in the last match at Scotstoun, notching up 11 tackles, 11 carries and a crucial try for his side. Fraser was absent that day (and at Murrayfield the week before) and his influence on how Glasgow play should not be understated. Injuries and international duty have curtailed his game time but when he has been on the pitch he’s averaged a whopping 13 carries and 15 tackles per 80 minutes.

All to play for then and it’s great to see outstanding players pushing each other to new heights.

Glasgow at home to Edinburgh in the PRO12/14 era:

For some stats from that game fixture check out On Top Of The Moon’s page in the matchday programme!

More free kicks awarded than any other ref in the PRO14 last season (28 – next highest was 18).

Mr. Adamson has taken charge of 26 PRO14 regular season fixtures over the past two years – that’s more than any other official. All that gametime seems to have mellowed him and this season he is only averaging 17.7 penalties per match. That’s moving him much closer to the sphere of experienced game managers like George Clancy (16.7 ppm) and Nigel Owens (13.5 ppm). It will be interesting to see how he runs things on Saturday.

Highlights of all matches in Round 12: