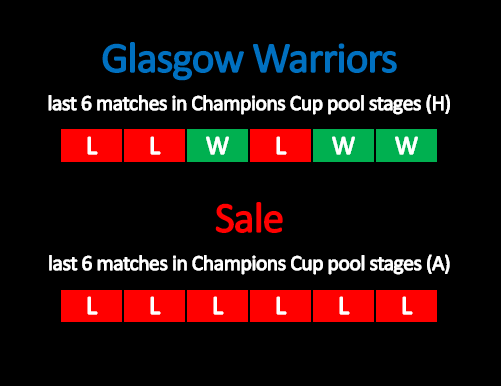 Champions Cup debut time for Ratu McTagive. The former Australian (but now a Scot!) has had to wait patiently for his opportunity but early season form has earned his place in this game. Ratu will be the 223rd player to feature for the Warriors in the Champions Cup.

Ryan Wilson will make his 41st Heineken Cup appearances for Glasgow – only Rob Harley (45) has made more.

There’s a return to Scotstoun for Warrior number 209 Byron McGuigan who picked up 4 tries in 20 appearances and whose last game for the club at this venue was back in December 2013.

There might actually have been two former Warriors involved on Saturday. Scrum half Will Cliff played for Glasgow in a preseason friendly in 2010 (coincidentally against Sale) but his proposed loan move fell through. That meant much more game time in his debut season for Henry Pyrgos who would go on to make nearly 150 appearances for the Warriors, including starting the PRO12 Grand Final in 2015. Funny how these things work out…

Adam Hastings has packed an awful lot into his time at Glasgow so it’s worth remembering he’s only just starting his second season as the club’s first choice 10. That’s a position that means in many ways he sets the tone for the club and how they are going to play the game. During 2018/19 his real point of difference (to borrow one of Dave Rennie’s favourite expressions) was the chaos he could cause taking the ball to the line. Despite working in some of the most congested areas of the pitch Adam was the Warriors’ top performer for defenders beaten (by a long way) with 72.

There’s a good balance to the young stand off’s game though and it will be instructive watch how it matures over the next few years. The advantages to be won through a clever and varied kicking game keep coming up as one possible way that teams might look to develop to find an edge and Hastings’ skillset could certainly adapt to that way of playing. Last season his ratio of when he kicked / passed / ran was 18% / 53% / 29%. It’s early days in the current campaign but so far he’s definitely showing a move towards kicking with figures of 29% / 48% / 23%. An ability to be a threat in all three areas will certainly keep the opposition guessing.

…against English sides in the pool stages of the European Cup:

Unsurprisingly with that last competitive game taking place 16 years ago there are no returning players for either side! The friendly in 2010 that Will Cliff featured in also saw involvements for Ryan Wilson, Chris Fusaro, Ruaridh Jackson, DTH van der Merwe, Robert Harley and Peter Horne. The turnover in players for Sale must have been higher as there doesn’t appear to be anybody from that game who remains in their squad 9 years later.

Second time around for M. Ruiz and Glasgow with the French official previously refereeing the club’s opening pool match in the 2017/18 Champions Cup. The opposition on that occasion was Exeter. The penalty count at Sandy Park was decisively against the Warriors (12 conceded and 5 for).

M. Ruiz was bang on the Top 14’s average of 21.9 penalties per game last season (that’s around 3.5 pens a match higher than in the PRO14). He’s a bit more laid back with the cards compared to other French whistlers with his average of 1.1 per game among the lowest in the Top 14.