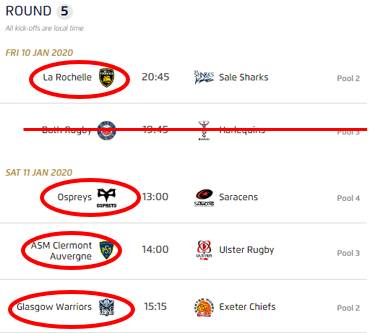 Fans of Glasgow find themselves nervously consulting pool tables and fixture lists as they try and figure out exactly what the Warriors need to do to secure a Champions Cup quarter-final for just the third time in the club’s history.

To save some stress let On Top Of The Moon be your guide to the sequence of results which maximises the chances of progression. Who should the Warriors’ faithful be cheering on over another two big weekends of rugby?

For Glasgow, the main target is to get into one of the spots for the three best 2nd placed sides in the pool stages. That means finishing with more points than the runners up in at least two other groups. There is still a mathematical possibility of the Warriors topping Pool 2 but it would involve:

That one’s getting filed under implausible…

For one of those quarter-final places as a best-placed runner-up Glasgow almost certainly need two wins against Exeter (H) and Sale (A). A bonus point or two would also help their case. This is what they would be looking for from each of the other pools:

Glasgow can finish ahead of Northampton if the Warriors can match or better the Saints’ results in their final pool matches. Northampton do look to have a friendlier finish to their group though with Benetton (H) followed by Lyon (A). Glasgow’s 30 point advantage in points difference means that if both teams win their remaining games and achieve the same number of BPs then the Warriors are likely to be ranked higher unless Northampton rack up large scores in the remaining two games.

Ulster and Clermont already have 1st and 2nd place wrapped up in this pool. For Glasgow to slot in ahead, one of these two teams will need to miss out in both of their remaining fixtures. The Warriors will be looking for the vanquished side from this Saturday’s Clermont v Ulster game to then go on and lose their final match – respectively Harlequins (A) and Bath (H).

Pool 4 – A Favour From Finn

One of Glasgow’s favourite sons can do give his old side a huge boost by the simple expedient of winning both remaining fixtures with his current team, Racing 92. Preferably while denying Munster (H) and Saracens (A) any bonus points please and thank you, Mr Russell…

OTOTM rating: hoping for Finn to do Finn things

It seems the Glasgow faithful need to be fans of all things French rugby over the next 11 days – two more wins for Toulouse would give Glasgow the chance to finish ahead of whichever of Gloucester or Connacht finishes as runners-up in this pool. For added incentive, there is, of course, a Warriors’ connection with the giant Richie Gray in the Stade Toulousain squad.

OTOTM rating: promising – with rugby royalty seemingly keen to ascend to the throne they last held a decade ago

Putting this all together gives the following teams for Glasgow fans to cheer on over the next two weekends: 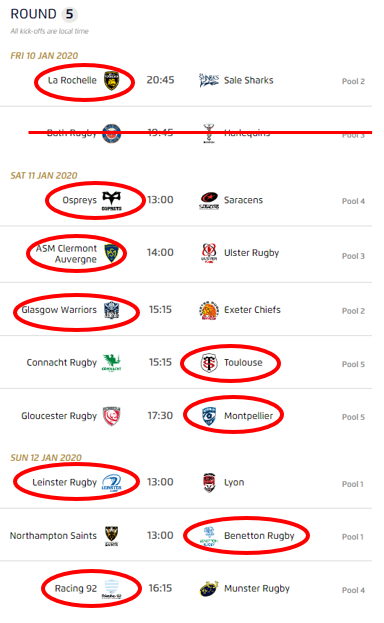