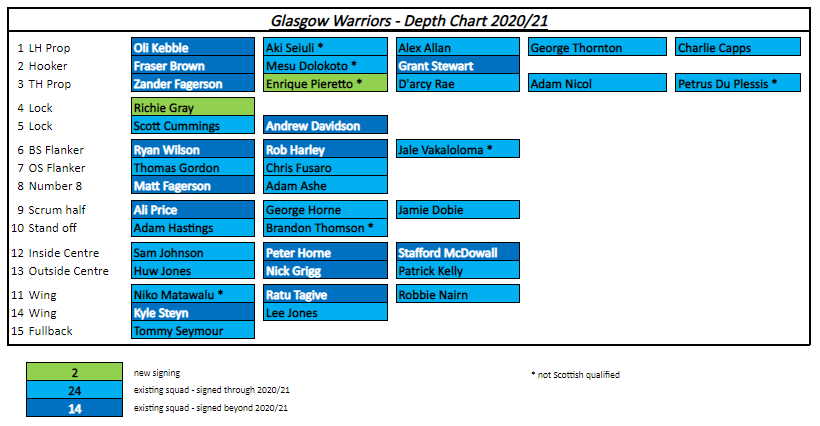 As things stand Glasgow Warriors have 40 confirmed full-time pros for next season. With the bones of the squad in place but a little bit of work still to be done, here’s a first look at the ‘Official’ On Top Of The Moon Contract Status Depth Chart for Glasgow Warriors 2020/21 (or OOTOTMCSDCGW 20/21 as no-one is calling it…)

Depth Chart with only players confirmed for next season included (click for large version):

And here are the remainder of this year’s full-time squad  (click for large version):

With 11 players signed up for next season and Enrique Pieretto joining from Exeter to replace the departing Siosiua Halanukonuka at tighthead prop there should be some consistency among the big lads in the front row. One outstanding issue is the status of George Turner who was due to be out of contract at the end of the current campaign. It would be a big surprise if the Warriors were to not re-sign the man who has been an able deputy for Fraser Brown as well as Scotland’s current third choice behind his clubmate and Edinburgh’s Stuart McInally.

If for any reason Turner was not to stay (possibly a move back to the capital?) then Sale’s Ewan Ashman would seem a good signing with one eye to the future. The Scotland u20 hooker has a strong all-round game and an eye for the try line. With all three of Scotland’s top choices likely to be playing in their final RWC cycle this a position in which the development of young players is becoming a priority looking towards 2023 and beyond. If Ashman doesn’t pitch up at Scotstoun then there surely has to be a high probability that Edinburgh will want to nab him from his current club.

Lock is where most questions remain to be answered in the pack. Richie Gray should hopefully be a direct replacement for little brother Jonny Gray. Both sides of the Scott Cummings / Andrew Davidson bromance are signed up (although rumours have been swirling of Andy moving to fill a gap for Edinburgh…) Beyond that – who knows?

Leone Nakarawa’s short-term deal is due to expire – has the last few months been enough to persuade him that being happy in Glasgow compensates for, in all likelihood, having to accept a lower salary than elsewhere (certainly what some French press reports ahve suggested he’s sticking around)? Tim Swinson will turn 34 during the 2020/21 season. If his next step is into refereeing and he wants to reach the top level in that role will he be keen to get started with the whistle? Things had been rolling along quite nicely during for 2019/20 for Kiran McDonald until he was derailed by a hip injury. At 25 can he continue to improve and hit his peak?

If any of the unconfirmed trio do depart there will be a space needing to be filled. Current Scotland u20 Cameron Henderson has signed up with Leicester but another Academy player (and Cameron’s predecessor for the u20s) in the shape of Marshall Sykes is a serious prospect. The wrinkle here is that with Edinburgh short at second row, Richard Cockerill has also been eyeing up the Ayrshire Bull. It would be a real blow if the Warriors were to miss out on a player who may well turn out to be a future Scotland international after he’s spent two years in the Glasgow branch of the Scottish Rugby Academy.

With three veterans, three young fellas and Adam Ashe straddling the middle ground there’s a decent balance to the back row stocks. After missing much of last season with shoulder problems, Jale Vakaloloma could be like a new signing for the upcoming campaign.

There seems to have been an assumption that club captain Callum Gibbins was for the off at the same time as Dave Rennie. The lack of news about the skipper does maybe start to suggest he could be signing on for at least one more campaign. Bruce Flockhart’s big breakthrough game against Benetton was immediately followed by injury and the suspension of the PRO14! Nae luck for the powerful back row but he’s surely shown enough to warrant another year or two to keep progressing into the sizeable ball carrier Glasgow need him to be.

With no Academy Stage 3 specialist back rows aligned to Glasgow last season  and Edinburgh having signed up 3 of Scottish age grade rugby’s hottest prospects in these positions (Connor Boyle, Rory Darge and Ben Muncaster) the Warriors may need to cast the net wide for next gen players to bring onto the conveyor belt.

Glasgow have three outstanding young talents to call on at 9. The departure of Nick Frisby allied to the fact that Ali Price and George Horne are first and second choice for Scotland means that another full-time scrum half is essential. Dave Rennie seemed reticent to regularly unleash the madness of Niko Matawalu at 9 but if Danny Wilson is more amenable to playing it a bit bonkers it could save the club having to fork out for an experienced backup.

There’s probably still room in the rotation for a young up and comer. A player on a partnership contract deal with a Super 6 club (maybe Kaleem Barreto if he returns from a spell with Stade Nicois in France) or a suitably precocious Academy talent (Kristian Kay might fit that role) could grab any extra minutes when the principal protagonists are unavailable.

Stand off looks settled with Adam Hastings and Brandon Thomson in situ plus Peter Horne playing both 10 and 12. There were rumblings of Brandon returning to South Africa to play for the Kings though. If that were to come to pass then a full-time deal or partnership contract with Ayrshire Bulls’ fly half Ross Thompson would seem sensible. In fact, with one eye on the future then even if there are no departures Ross may well find opportunities to be involved at the Warriors.

All settled in midfield with plenty of talent in the full-time squad plus Robbie McCallum and Grant Hughes developing in the Academy and Super 6. This could potentially be a big season for Stafford McDowall who has all the size and skills to be pushing to be Scotland’s inside centre in time for the next World Cup.

The obvious solution to the space created by Stuart Hogg (and not really filled last season) would have been a second spell at Scotstoun for Sean Maitland. However having gone to the market and not found a suitable candidate for the start of 2019/20, this time around the Warriors haven’t been able to persuade Maitland away from a Championship-bound Saracens.

In the short term, Danny Wilson needs to decides whether to stick with the trio of players that got Glasgow through the most recent campaign at 15 – Glenn Bryce, Tommy Seymour and Ruaridh Jackson. If there’s room in the budget then one option experienced option might be Kini Murimurivalu who is out of contract at La Rochelle. The successful cultivation of a Fijian enclave at both Glasgow and Edinburgh might make the Warriors an attractive option for the 30-times capped full back.

With an average age of over 30 among the back 3 options, the conveyor belt needs to start moving pretty quickly in this area. Two massively talented under 20s should almost certainly come into contention – Ollie Smith (primarily a full back and centre) and Rufus McLean (wing / full back). There’s also a decent chance that Femi Sofolarin tied himself to Scotland via the 7s with an eye on more than just playing in the abbreviated form of the game. The pacy winger could well contribute to the Warriors’ major overhaul of their back 3 stocks over the next two or three seasons.

During 2019/20, Glasgow’s average squad size was 52 full-time players. A bit of a decrease is to be expected for a non-RWC season (although who knows what impact the current pandemic is going to have on the shape of the next campaign, including how much overlap there is between club and international games!). Assuming a group of 48/49 full-timers seems about right then signings / re-signings still to come on top of the 40 already confirmed might look something like this:

For a detailed look at Glasgow’s squad at the start of the current campaign click here.

Hat tip to Rossco on the glasgowwarriors.com forum who keeps track of all contracts here.