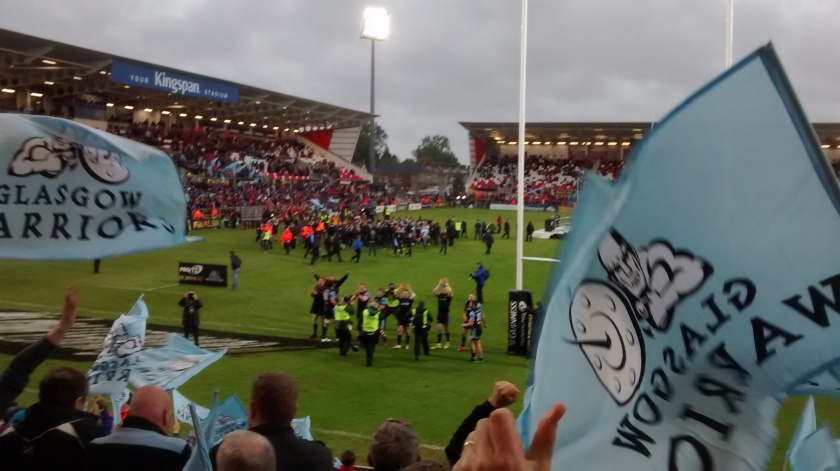 Five years ago today, Glasgow Warriors celebrated the most remarkable day in the club’s history so far. On Top Of The Moon takes a deep dive to look at some of the more unusual facts around that special game.

1. The starting XV at the Kingspan never started a game together before or after the final.

For half a dozen matches prior to the Grand Final as many as 9 of the starting lineup had been in the XV, including the back-to-back matches against Ulster at Scotstoun for the end of the regular season and playoff semi-final.

After the final the highest number of that group to be reunited was 10 in each of two games against Connacht – again for a season-ending match followed by a playoff semi-final, both at the Sportsground. Three retired and departed players were no longer available. The injured Richie Vernon missed both games. Henry Pyrgos was absent for the regular season fixture, while Rob Harley sat out the semi-final.

2. The matchday 23 at the Kingspan was also a one-off.

The most from that group to have been included in a squad prior to the final was the 19 selected for the semi-final 8 days earlier against Ulster. Dougie Hall, Rob Harley, Jon Welsh and Jerry Yanuyanutawa were the 4 brought into the 23 against Munster, replacing Adam Ashe, Mike Cusack, Ryan Grant and Pat MacArthur.

A 27-17 win over Ulster at Scotstoun in March 2016 saw 15 of the championship winning 23 reunited – the highest since the final. Along with the six men who departed the club after the win over Munster there were two other absentees – centre pairing, Pete Horne and Richie Vernon.

3. Even within the positional groups selected there wasn’t always a huge amount of history together.

Front row:
1st (and last time) they ever started together.
Second row:
8th time (they managed another 10 before Leone Nakarawa left).
Back row:
5th time (managed 8 more before Josh Strauss left).
Half backs:
10th time (managed 12 more before both Henry Pyrgos and Finn Russell left).
Centres:
7th time – until the run-in to the 2014/15 season Peter Horne and Richie Vernon had only started together at 12 and 13 once. They played 6 games in a row as a combo at the end of the campaign, including the semi-final and final. They were only reunited once more for Glasgow – against the Ospreys at Scotstoun in November 2015. Overall the Warriors won 7 out of the 8 games when starting with this centre partnership.
Back 3:
7th time (managed 10 more between DTH van der Merwe’s return and Stuart Hogg’s departure).

4. There were 6 changes from the starting side in the thrilling win over Ulster in the semi-final.

Dougie Hall and Rob Harley came in from outwith the 23. Four players who had helped close out the victory over Ulster were promoted from the bench – Leone Nakarawa (switching places with Al Kellock after replacing the skipper early on at Scotstoun in the semi); Gordon Reid (in place of the injured Ryan Grant); DTH van der Merwe (in his 2nd game back from injury); and Ryan Wilson (in his 4th game back from injury).

5. Six of the Grand Final starting XV made their Glasgow debuts in a 12 month spell from September 2010 to September 2011.

7. As things stand next season’s Glasgow squad will include 7 of the final-winning squad, including 4 starters.

8. The matchday 23 included 17 players who were or would go on to be Warrior Centurions.

That number will increase to 18 when Fraser Brown (currently on 98 appearances) plays a couple more games for Glasgow. Of the remaining 5 players Richie Vernon missed out on a century by 1 game. Finn Russell played 81 times before leaving for Racing. Leone Nakarawa is on 72 (and may yet add to this tally). Jerry Yanuyanutawa managed 48 appearances. Rossouw de Klerk featured 17 times in his single season with the club.

9. The matchday squad featured all five of the top try-scorers in Glasgow’s history.

11. This was the 5th and final time that Al Kellock played in a game for Glasgow but was not the captain.

He skippered the club in 152 fixtures, more than a quarter of the matches the Warriors have ever played.

It was the 21st of those games with an Irish opponent and the 7th featuring Munster (5 wins, 2 loses).

13. The final was the 27th time the Warriors had played Munster and the 1st at a neutral venue.

It was Glasgow’s 11th win against the Irish province and just the 3rd outwith Scotland.

14. The game was the 15th competitive fixture Glasgow had played at the Kingspan Stadium / Ravenhill in just under 18 years.

It was their 6th win at that venue.

15. This was just the 2nd time that Glasgow had won a game with a palindromic scoreline (reading the same forwards and backwards).

The previous occasion came just 5 weeks prior to the final when Connacht were dispatched by exactly the same 31-13 scoreline.