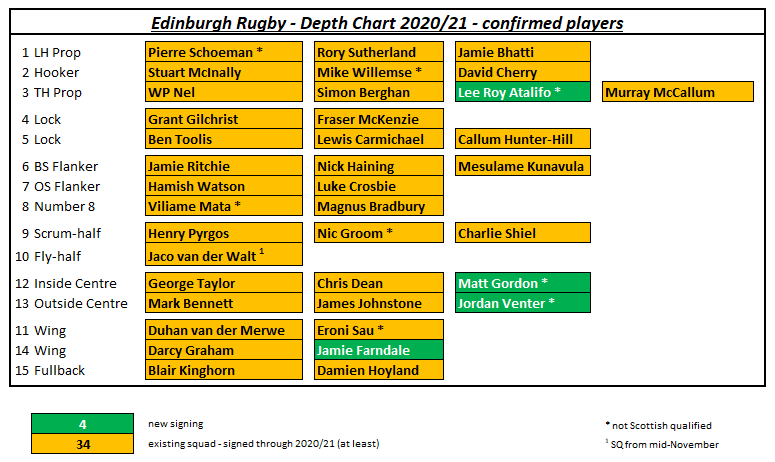 As things stand Edinburgh have 38 confirmed full-time pros for next season / when rugby returns. Information gleaned from Richard Cockerill’s lockdown press conferences plus leaks on a move along the M8 take that squad size up to 41 – more on that later. With that in mind, here’s a first look at the ‘Official’ On Top Of The Moon Contract Status Depth Chart for Edinburgh 2020/21.

Depth Chart with only full-time players confirmed for next season included (click for large version):

And here are the remainder of last season’s full-time squad  (click for large version): 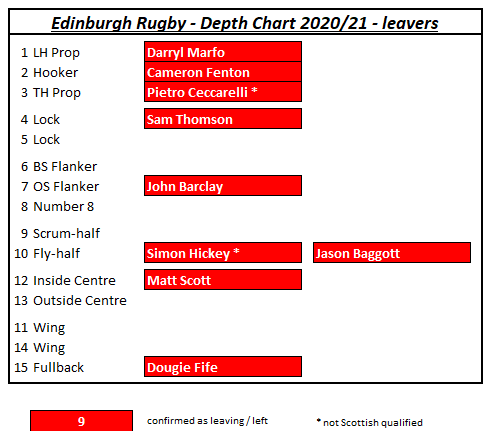 Darryl Marfo departed midway through the 2019/20 season and Edinburgh ran with three senior looseheads from then on. Given Cockers’ comments to the press a few weeks ago it looks like Academy player Sam Grahamslaw will be the man to take over the 4th slot in the rotation going forward.

On the other side of the scrum Pietro Ceccarelli will probably be harder to replace having played in 14 of Edinburgh’s 19 games during 2019/20. Fijian international Lee Roy Atalifo has signed on from English Championship side jersey Reds to help back up WP Nel and Simon Berghan but the hope is probably that Murray McCallum will fulfil his promise and be the one putting pressure on his fellow Scotland internationals.

Hooker looks short of cover with just 3 full-timers for a specialist position. Scotland u20s’ Ewan Ashman was on loan at Edinburgh from Sale during the 2019 RWC – although he didn’t get any game time. He would be an excellent permanent signing with depth in mind and one eye on the age profile in this area.

Edinburgh’s top quartet will be as you were for the 4th season running. Callum Hunter-Hill was out on loan for nearly all of last season and, although not officially confirmed, looks certain to make his move to Saracens permanent. With Sam Thomson also departing there’s room for another lock or two.

Given that Ben Toolis, Grant Gilchrist and Fraser McKenzie will be 29, 30 and 33 respectively by the conclusion of the 2020/21 campaign, Edinburgh’s management’s thoughts have turned to younger players to bring onto the conveyor belt. The leaked move for 23-year-old (soon to be 24) Andrew Davidson from Glasgow adds depth in place of Thomson. Cockers also appears to have his eye on an even younger addition with Academy players Marshall Sykes and Charlie Jupp as well as Jamie Hodgson (who was on a partnership contract with Edinburgh and Watsonians last season) mentioned in dispatches to become full-time professionals.

Even with the departure of John Barclay this remains arguably the strongest area of the Edinburgh squad. Again heavy hints have been dropped by Richard Cockerill that the space created will be filled by a couple of Academy promotions. Connor Boyle and Rory Darge are two of the brightest prospects in Scottish rugby and have starred for the u20s in recent years.

There is an argument that with both players being primarily opensides and with Scotland’s first and second choice in this position (Hamish Watson and Jamie Ritchie) already being at Edinburgh, Boyle and Darge should be split up across the two pro teams. It’s an argument that’s only likely to come from one end of the M8 though! Edinburgh fans will be delighted with the knowledge that pretty much whatever back row unit they put out it will be a match for almost any side in the PRO14.

There are no changes in personnel at scrum half – although Edinburgh’s coaches will no doubt be pushing Charlie Shiel to continue his progression and for him to try to overtake his two older colleagues in the number 9 pecking order. The top three options should hoover up nearly all the minutes but Roan Frostwick could provide emergency cover either as an Academy player or on a partnership contract with a Super 6 club.

Stand off was an area that Cockers and co. would have seen as being sorted. Departing backup Simon Hickey replaced by Jono Lance. Departing youngster with potential Jason Baggott replaced by Nathan Chamberlain (on an Academy deal initially therefore not on the full-time Depth Chart above but scheduled to move on to a pro contract – probably for 2021/22). The rejection of Lance’s visa application has thrown that all up in the air. Chamberlain is the hottest prospect at 10 in Scottish Rugby but he still hadn’t made his Bristol debut before signing on at Edinburgh. Expecting him to be Jaco van der Walt’s backup right off the bat is likely to be a step too far.

Edinburgh are left to go back to the market late in the day. Salary cap and pay cut ructions in England may open the door for some experienced campaigners to unexpectedly move on. Even allowing for that, if the capital club can secure the services of someone who has played regularly at a top league level they’ll be doing very, very well.

Matt Scott’s move to Leicester leaves a big gap to be filled. George Taylor was having a breakout season before it was cut short and there is plenty more to come from a young man who will be targeting following age grade contemporaries like Adam Hastings, Rory Hutchinson and Blair Kinghorn on to full Scotland caps.

Matt Gordon (signed from London Scottish) will provide a direct running option. Teenager Jordan Venter (signed from the Paul Roos Gymnasium School and arriving in December) will be part of the continual effort to try and make the next generation of players stronger than the one that went before. In a position where Edinburgh previously lacked depth only Chris Dean remains from the B.C. (Before Cockers) era. The former Leicester head honcho has built up a pretty handy six man group of centres with an average age of 25.

The first choice options in this area are all outstanding operators with serious Scotland ambitions. The backups are more than solid with Jamie Farndale replacing Dougie Fife and joining Damien Hoyland and Eroni Sau to provide cover at wing and full back. The non-signing of Jono Lance may have a knock on effect here as he would have been able to provide cover at full back as well as stand off.

Test call-ups may be even more of an issue than usual during 2020/21 so Edinburgh are likely to need more depth here. Jack Blain was on a partnership contract with Edinburgh and Heriot’s last season and his combination of size and speed looks a good fit for the professional game. Similarly, Jacob Henry impressed when starting for Scotland u20s ahead of Blain during the most recent Six Nations. His fellow Academy player, and Southern Knights’ teammate, Nathan Sweeney, is another who could come into contention after game time during the Super 6’s inaugural season.

During 2019/20, Edinburgh’s average squad size was 43 full-time players. They also had a number of loans and cover from Scotland 7s – although most of these players’ minutes came during the 2019 World Cup. With Richard Cockerill seemingly fairly content with his business the players to add to the confirmed names above to take the squad to around 44/45 could be:

For a detailed look at Edinburgh’s squad at the start of the 2019/20 campaign click here.