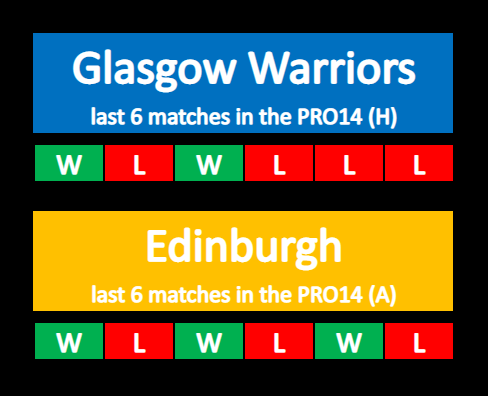 Rufus McLean will become Warrior number 320 when the game kicks off on Friday night. The winger, who is equally comfortable at full back, was in outstanding form during the under 20 Six Nations in 2020. He will be the 8th player from that squad of Scotland u20s to make his top level club debut, following in the footsteps of Ewan Ashman, Jack Blain, Conor Boyle, Nathan Chamberlain, Rory Darge, Roan Frostwick and Cameron Henderson.

Ryan Wilson will start for Glasgow for a remarkable 27th consecutive match, having not missed a game for over 14 months. This moves him into 5th equal all-time for this streak alongside David Hilton (27 starts in a row between August 2000 and May 2001). Only 3 players in the club’s history have managed longer runs – Sean Lamont, Jon Petrie and Bernardo Stortoni (twice) – with the Argentinian full backs streak of 43 consecutive starts between September 2007 and March 2009 being top of the tree.

When he is sprung from the bench Willem Nel will play his 150th match for Edinburgh. The prop has made a huge contribution to Scottish rugby since arriving in 2012. While his role at club level may have diminished from the early days (he played 81 out of Edinburgh’s 87 matches from his debut until he went to the RWC in 2015 with Scotland) he remains central to the capital club’s set piece.

Warrior to Watch / Edinburgher to Eyeball:

In the absence of Fraser Brown the top two choices at hooker for Scotland’s Six Nations campaign will be on show at Scotstoun. Both George Turner and Stuart McInally build their game on a huge workrate. As well as playing key roles at scrum and lineout these are two players with high involvements around the park with the Warriors’ hooker averaging 30.1 carries + tackles per 80 minutes in the PRO14 last season and his opposite number managing 28.8.

George is one of the forwards who brings an aggressive edge to the Glasgow pack. He’s an abrasive tackler and a dynamic carrier and was the top performer for tackle breaks in the Warriors’ pack last season. Stuart is more measured but certainly no less effective. His 98% tackle completion rate was 4th best in the league during 2019/20 and he is a relentlessly consistent performer.

Both men are converted back rows and their turnover threat comes into play when they themselves are not the ones making the tackles – and sometimes even then given their ability to work hard and get back on feet. This pair will give it everything on Friday night and neither will be taking any prisoners in the race for league points and Scotland shirts.

Glasgow v Edinburgh at Scotstoun in the PRO12/14 era:

This will be the 8th time that Mr Adamson has taken charge of a Warriors’ fixture, with all bar one of those games (v Southern Kings in 2017) being 1872 Cup matches against Edinburgh.

There has been a lot of hard graft to get to this point but next month Mr Adamson will become the first Scot to referee in the Men’s Six Nations since 2002.