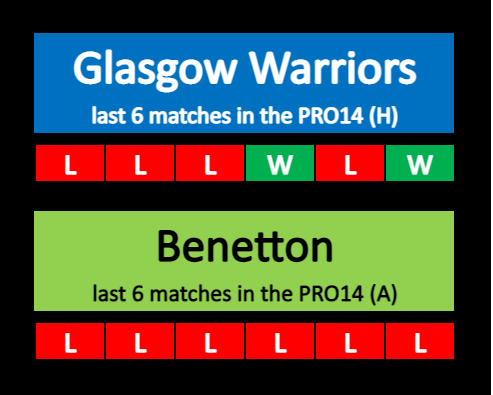 It’s a big welcome back for George Horne who will play his first game for the Warriors since the 2nd of November 2020. Fraser Brown will be making just his second appearance at Scotstoun in the last 14 months..

It wil have been 512 days since the Warriors last played a match without Ryan Wilson in the lineup. The club co-captain managed a run of 32 consecutive starts which is brought to an end by his involvement on the bench for Scotland in Paris. Only Jon Petrie (37 starts from 2000-2001) and Bernardo Stortoni (43 starts from 2007-2009 and 36 starts from 2009-2010) have had longer sequences for Glasgow.

Aki Seiuli loves a bit of graft. From the moment the big man touched down in Scotland he’s consistently hit double digits for carries and tackles (this season in the league he averages 11.3 carries per 80 minutes and 13.5 tackles per 80 minutes).

That level of consistency of effort on both sides of the ball would be admirable in any player but particularly so in a prop. His setpiece fundamentals have been pretty good too. Sometimes it can come down to who the referee is but when he’s found the right picture for the officials he has been an outstanding scrummager – eg Edinburgh at Scotstoun where he must have been a close second to Ross Thompson for the Player of the Match award.

Glasgow v Benetton Rugby at home in the PRO12/14 era

Remarkably in a season running to just 16 games this will be the fourth time in this campaign that Glasgow will have been refereed by Mr Murphy. On the positive side, the Warriors have won two of those three previous fixtures. On the negative side, already this season the Irish whistler has yellow carded Richie Gray, Nick Grigg, Cole Forbes and TJ Ioane as well as sending off Adam Hastings. Not the perfect setup when Glasgow average more than 20 minutes a game shorthanded across their last six fixtures!