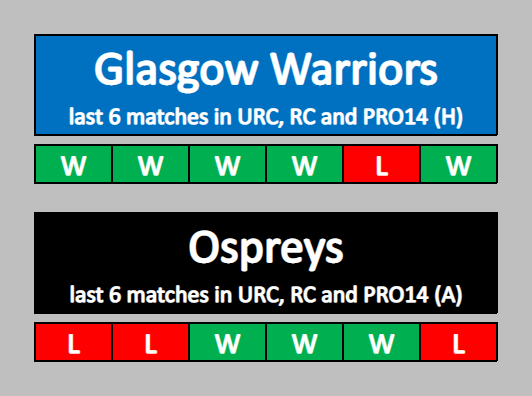 Giant winger, Walter Fifita, will become Warrior number 340 when he comes off the bench. For the current season, he will be the 12th debutant and the 42nd player used by Glasgow.

Overall, Walter will be the 30th player to make their club debut under Danny Wilson. 20 of those men are still with the Warriors – 18 in the current full-time squad and 2 with the Academy.

Richie Gray’s absence means that there are no Glasgow forwards who will have featured in all of the club’s opening 10 fixtures for 2021/22. There are 3 backs who will have played in every match – Ross Thompson, Sione Tuipulotu and Cole Forbes.

This will be the 20th time that Dan Evans has started a game against the Warriors, across his time with the Scarlets, Dragons and Ospreys. His first encounter with Glasgow came on 4th April 2009 when his opposite number was Colin Gregor. Since then he has started at full back against:

George Turner will be in the number 2 jersey for the fifth match in a row for Glasgow – his longest streak of consecutive starts since joining the club. Coming off the back of an outstanding year in 2021, during which he started 7 of Scotland’s 9 Test matches, the hooker is putting huge pressure on the players who have previously been ahead of him in the Depth Charts for club and country.

Glasgow supporters have become accustomed to George’s hard-hitting style. There is no unrestrained version. Whether it’s carrying in attack or tackling in defence everything is done at full tilt, all the time. The former Edinburgh player may not have arrived with the same fanfare as some of Dave Rennie’s other early signings but he has established himself as a fan favourite thanks to his wholehearted approach.

Turner’s setpiece work has also developed significantly since he arrived at Scotstoun. The Warriors currently have the best success rate on their own lineout ball in the URC. While he may not have Richie Gray to aim at on Saturday night, the return of Ryan Wilson is a big boost as George has combined extremely well with the club captain to provide quality attacking ball for his side.

Glasgow at home to Ospreys in the PRO12/PRO14/URC era:

While there is always room for improvement, the Warriors’ much criticised discipline has been on an upward trajectory, particularly in their home fixtures. After coughing up 26 penalties in the double header against the South African sides (with the Sharks and Lions only combining for 16 pens conceded) Glasgow subsequently ‘won’ the penalty count in their fixtures against Leinster, Dragons and Exeter. You would have to go back more than two years to find a lower number of penalties conceded by the Warriors than the 6 they gave up versus the Chiefs.

Mr Busby is a high penalty count ref compared to many of the officials in the league so in his third appearance in a Glasgow fixture he will provide a real test of this improved discipline.