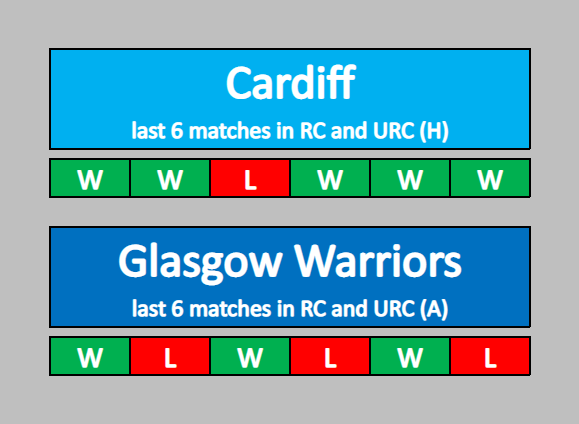 It’s been 11 weeks since some of the Warriors’ Scotland stars last played in the URC. Both the club’s Lions – Ali Price and Zander Fagerson – as well as their 2021/22 player of the season – OTOTM is calling it early for Rory Darge – are back in action for what will be a crucial fixture in Glasgow’s push for the playoffs and, ideally, a top 4 spot.

Zander Fagerson will make his 50th start in the URC – there are only 6 other players in the current Glasgow squad who have achieved that feat.

Sam Johnson’s winning streak for Scotland might have come to an end last week but one of Glasgow’s most consistent performers will get straight back on the horse as he returns to domestic action this Saturday.

While there are plenty of forwards maintaining a 90%+ tackle completion rate in the league, Johnson is a relative rarity as a back who is sitting at 93%. In attack, he is a dependable carrier who he can get Glasgow on the front foot by sitting down defenders (either by a bit of evasion or a more industrial bosh that speaks to his time in rugby league).

Sam often goes under the radar as someone who just does everything well. He’s the kind of player that helps knit a backline together and who the coaching staff knows will just knuckle down and get on with whatever role they need him to fill at inside centre.

The former Queensland Red should hit a century of appearances for the club at some point next season. The quiet man who arrived with little fanfare in 2015 has really played a big part in the life of the Warriors over the last 7 years.

Glasgow away to Cardiff in the PRO12/PRO14/URC era:

Previous match-up away to Cardiff:

This will be Mr Jacob’s third match in the URC outside South Africa and the first where he will take charge of a Warriors’ fixture. His previous 2 games in the northern hemisphere have both featured a couple of yellow cards. His last outing (in South Africa) included a brace of reds! Glasgow have gone into this game pretty much as fully loaded as they can and won’t want to lose any of the benefit of their stacked lineup through indiscipline.