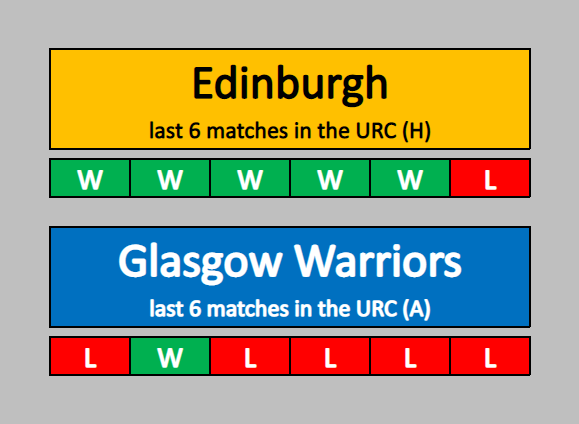 It has been more than three months since Warriors’ fans last got to see the scampering feet of Rufus McLean carving up opposition. His battle with Darcy Graham should be a good one. Might we see both of these wingers in tandem for Scotland against Argentina in the summer?

No-one has played in more 1872 Cup matches than Rob Harley who will suit up for the 23rd, and sadly final, time. Grant Gilchrist and Ryan Wilson will both make their 20th appearances in the 1872 Cup series.

Richie Gray will start his 20th match of the 2021/22 campaign – this is just the second time in his career that he has started 20 or more club matches in a season. Jack Dempsey (21 starts) is the only other player across the Glasgow or Edinburgh squads (with a combined 96 players used) to hit this mark.

The current blistering form of Mark Bennett would feel familiar to Glasgow fans who got to watch him tear teams apart from 13 in a black and blue jersey. They will also be familiar with the clever control (and dodgy moustache and mullet combo) applied from the bench by Henry Pyrgos.

Josh McKay has settled in quickly, despite not being able to make his club debut until early December. His reputation for being rapid preceded him but the Kiwi back 3 doesn’t shirk the physical stuff either when he gets into close quarters action.

Josh is just one behind Kyle Steyn in the race to be Glasgow’s top try scorer this season*. With at least two games to play the coaches and fans will be looking to him to provide the attacking threat out wide and add to that try rally. Any remaining fixtures will be tough battles up front though. It will be down to the Warriors’ pack to provide Josh some decent possession to work from.

* if tries from mauls are excluded…

Glasgow v Edinburgh at Murrayfield in the PRO12/PRO14/URC era:

Previous match-up away to Edinburgh:

This will be the fourth time this season that Mr Brace has taken charge of a Glasgow match. He was the man in the middle for Zebre away, Exeter at home (a supply gig after the original French officilas couldn’t travel) and Stormers away. He also reffed the Rainbow Cup match at Murrayfield last season between these two sides.

He is now one of the URC’s most experienced referees – which can be seen in his lower penalty count. He still has some way to go to rival the league’s previous generation of game managers like Nigel Owens and George Clancy who would be averaging pens in the low teens with the aim of allowing matches to ‘flow’.