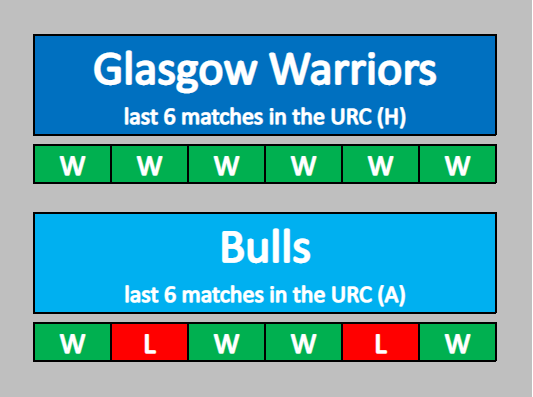 There are a few players who get to run out at the Scotstoun for the first time in a long time on Saturday. Ryan Wilson has been waiting since 1st April v Zebre. Josh McKay hasn’t trodden the hallowed (plastic) turf in a competitive match since 18th March against Edinburgh. It’s Sam Johnson who has had the longest wait, not playing at Scotstoun since 19th February versus Benetton – he did manage to squeeze in no less than 9 appearances in away fixtures in the intervening period though!

Sione Tuipulotu is the 41st player named to skipper Glasgow in a competitive fixture in the pro era. For some history and stats on some of the previous 40 check out this article. Sione will be the first player to lead the side from outside centre since current defence coach, Pete Murchie, way back in September 2015 against Connacht.

While Matt Fagerson has worn the number 8 jersey in 16 of Scotland’s last 19 Test matches, since Jack Dempsey arrived at the start of last season, he has only started at number 8 once for Glasgow – prior to Saturday. That has allowed him to demonstrate his flexibility though. After filling the openside’s shirt against Benetton, then running out at blindside flanker versus Cardiff, he will complete the trio of back row berths by starting at 8 against the Bulls in his third appearance of the season.

Against the Bulls he will get a chance in his favoured position where his ability to consistently get over the gainline – through a combination of deft footwork and strength – will be vital against a powerful visiting pack. Like his brother, the younger Fagerson is a grafter and he will put in a big shift in defence too. With Glasgow currently ranked 16th and last in the league for defence, it’s on this side of the ball that Matt might have the biggest contribution to make.

Glasgow at home to South African sides in the PRO12/PRO14/URC era:

Previous match-up v a South African side at Scotstoun:

After being the away side last week with a ref (Mr Peyper) whose penalty counts favour the home team, the Warriors find themselves back on home turf with a ref whose numbers tilt towards the viaitors! In their favour though, Glasgow have far more experience – over a number of seasons – with everyone’s favourite Irish/Welsh/Belgian official. In fact, this will be the third time in the Warriors’ last 8 league games that Mr Brace has been the referee.