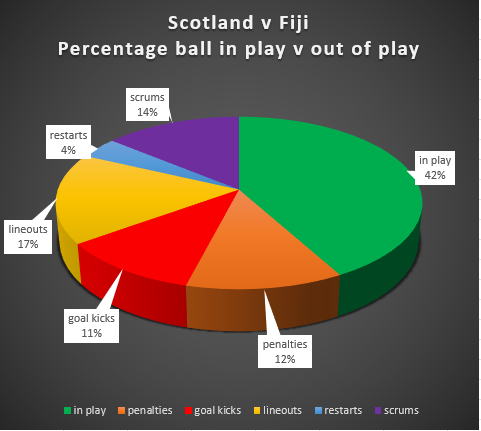 Across the Autumn Nations Series, On Top Of The Moon will be analysing games to try and put some numbers on exactly what it is that we’re watching in Test rugby. How much time is the ball in play? And where do the minutes and seconds go when the ball is dead?

Last week’s analysis of game time against Australia is here. For this week’s look at the Fiji fixture, read on.

Length of time of passages of open play:

The longest passage of ball in play was 2m 46s between the 25th and 28th minutes of the game. It started from the kick-off following Fiji’s second try and took in 23 passes, 15 rucks and 4 changes of possession (a handling error and 3 kicks) before it was ended by a Fijian forward pass into touch.

Only a single one of the penalties was tapped, with the remaining 21, plus one free-kick, all kicked to touch for a lineout – only one of these attempted kicks to touch (by Fiji) stayed in play.

Game time taken for each kick (from the point either a try or penalty was awarded):

There were also two quick lineouts where the ball was immediately brought back into play.

Just 10 of the game’s lineouts originated from open play with the remaining 21 arising as a result of penalties or free kicks that were kicked to touch.

Sequence of scrums in the game:

Resets seem to have fallen out of favour somewhat – after only 1 reset last week there were just 2 this time round, with both Mr Pearce and Mr Berry seemingly preferring to make quick decisions about which side was causing instability in order to get the game moving.

Of the 13 scrum offences called across the two games so far in Scotland’s Autumn Nations Series it’s worth noting that all bar one have been awarded in favour of the side putting in the ball.

The only occasion so far when the attacking side has been penalised was an Assistant Referee’s call against Zander Fagerson in scrum number 2 against Fiji. OTOTM is no expert in the dark arts of the front row but this appears to have been a genuinely poor decision with Fiji’s loosehead, Eroni Mawi, angling in and the elder Fagerson driving straight up the pitch.

The match clock was also stopped on 15 occasions – 3 times in the first half and 12 times in the second – for a total of 17m 32s (compared to 10 occasions for 9m 19s in the Australia game). Stoppages were for:

Therefore the actual time that passed from the opening whistle to half-time and from kick-off in the second half to full-time was 97m 49s of which the ball was in play for 33m 20s or 34%.