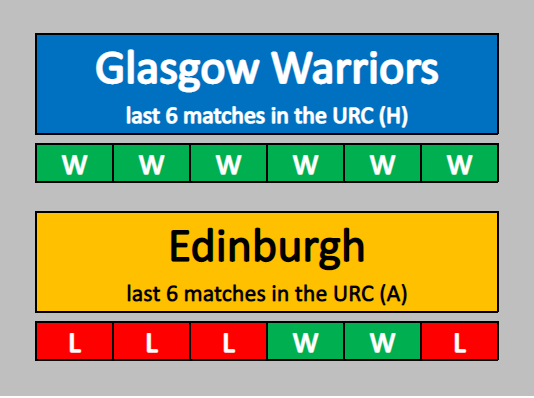 (players in CAPITALS are full internationals; figures in brackets are previous appearances for Glasgow Warriors or Edinburgh)

Nine players are in line to make their 1872 Cup debuts:

Cameron Neild will also be making his home debut for the Warriors.

There is a fair bit of crossover between the sides with Jamie Bhatti, George Turner, Simon Berghan and Henry Pyrgos all having played for both clubs.

There are some intriguing battles across the park – driven in no small part by the competition for places in Scotland’s Six Nations’ squad which will be named in a matter of weeks. No such concerns for Weegentinian, Sebastian Cancelliere, and Arginburgher, Emiliano Boffelli though. While the two Pumas will not be in direct opposition positionally watch out for any moments when the pair come together to contest high balls as both are masters of this craft.

In the centres, Stafford McDowall and Chris Dean have come close to Scotland caps in the past. With both men arguably showing their best ever form for their respective clubs could dominant performances over the next few weeks push them into contention for the Six Nations?

Murphy Walker will have the chance to audition for the gap left by Zander Fagerson’s injury – and there’s no better way to do that by a direct comparison with his opposite number, the indefatigable WP Nel who will have his own designs on the Scotland tighthead shirt. Murphy will need to be at his absolute best with Scotland’s number 1 number 1, Pierre Schoeman, in direct opposition at scrum time.

Matt Fagerson and Jamie Ritchie will no doubt have lots to talk about as they batter into each other at ruck after ruck. As things stand both men would expect to start against England at the beginning of February so the chat may include who should join them in the back row. With Hamish Watson, Rory Darge, Luke Crosbie, Nick Haining and Tom Gordon among those absent this week there are opportunities for Jack Dempsey and Connor Boyle to advance their case for a move up the national side’s Depth Chart.

Mr Blain only averaged 6.8 penalties per game against home sides last season – and these teams only picked up 1 of the 10 yellow cards he issued. Before Warriors’ fans get too excited his numbers in both areas are a bit more even between hosts and visitors so far in 2022/23. Still, Mr Blain will no doubt be delighted to have an extra 7,351 assistant refs to keep him right at Scotstoun on Friday night!