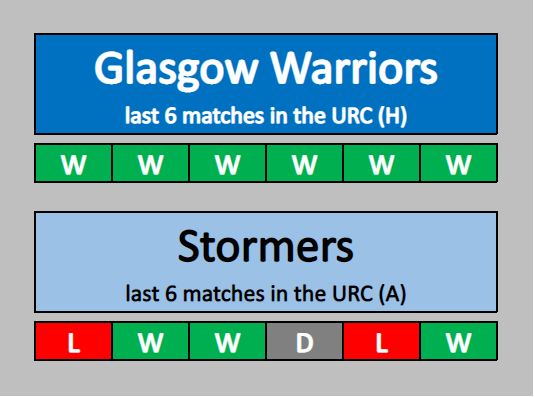 Ollie Smith will make his first appearance at Scotstoun this season having played in 4 away fixtures during the current campaign. In fact, Ollie’s last 10 outings have all come away from home so he will be glad to step onto the hallowed (plastic) turf for the first time since 19th February 2022 against Benetton – when he was Player of the Match. Huw Jones has had an even longer wait and will run out at Scotstoun for the first time since the game versus Ulster on 19th February 2021.

George Horne makes his 50th start for the club. Fraser Brown will play in his 100th URC fixture, joining Ryan Wilson and Duncan Weir as the only men in the current squad to achieve this feat.

This season has been transformative in terms of Tom Jordan’s time at the club. Despite being on a full-time contract he couldn’t crack the Glasgow matchday squad during 2021/22, spending his time productively as a central part of Ayrshire Bulls run to the Super 6 title. This year has seen him establish himself at stand off for Glasgow – this will be his 10th start of the campaign in the number 10 shirt. Across the last 7 seasons, only 3 other players (Adam Hastings, Finn Russell and Ross Thompson) have managed that.

As the campaign has progressed his kicking from hand has improved hugely, with distance increased significantly and now providing a real outlet to gain territory and relieve pressure. His goal kicking hasn’t been required while George Horne has been on the pitch but Tom did notch a couple of particularly vital penalties in the home leg of the 1872 Cup and has looked increasingly confident as he has settled into the team.

It is his running game that provides the most excitement though and which really fits in with how the Warriors are looking to challenge opposition defences. Against Edinburgh, at Murrayfield, there were a try and an assist to enjoy as well as putting Mark Bennett on his backside with a hand off that so very nearly lead to another score.

No longer being classed as a non-European player in the league (due to his 3 years’ residency in Scotland) has opened the door but it has been TJ’s performances that have seen him and the club progress. He needs nearly another 2 years before reaching Scottish qualified status but if he continues to develop there is no reason why he couldn’t be a contender for Test honours during the 2027 RWC cycle.

Glasgow at home to South African sides in the PRO12/PRO14/URC era:

Previous match-up v a South African side at Scotstoun:

There was more than a 5 year gap between games at Scotstoun for Mr Brace between March 2017 and October 2022 (he did referee 9 Glasgow games in the intervening period – all away from home) so it’s good to see that match with the Bulls last autumn hasn’t put him off for another half decade!

The Irish official was also in charge of these sides’ only other meeting – at Newlands in April 2022 when the penalty count was a lopsided 15 – 9 in favour of the Stormers and Josh McKay was yellow carded for the Warriors.