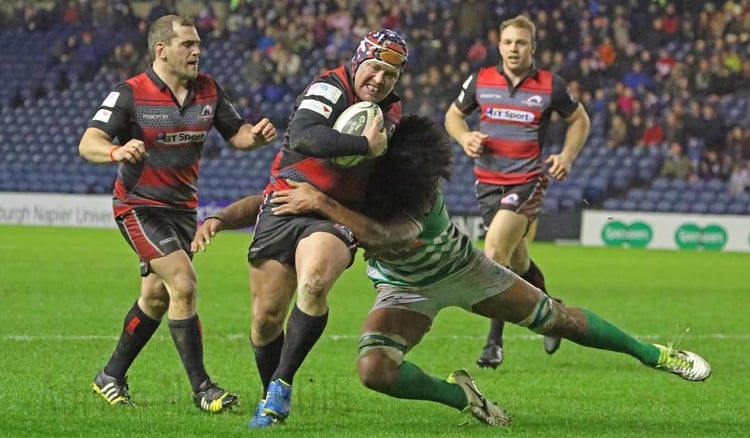 It’s been an up and down season for Edinburgh so far. They’ve beaten 4 former champions but also lost to Zebre. Overall though they have been well worthy of their place in the top half of the table. Can they take things one stage further though – what do they need to make it to the playoffs?

Looking at the Pro 12 at the halfway mark and very crudely extrapolating that to the end of the season we arrive at a final table along the lines of:

While the actual final line-up may change it gives a good indication of the level of points required for the playoffs. This also ties in with the points during the last World Cup in 2011 which were an average of 4.5 points lower across the playoff spots than in the following 3 seasons.

The men from the capital have put 36 points on the board from their 12 matches so far (8 wins, 1 try BP & 3 losing BPs). Setting a target of 67 points as giving a strong chance of making the playoffs this leaves them needing 31 from the 10 remaining fixtures. Edinburgh have been efficient at collecting losing BPs this season but have continued to struggle to score try BPs (in fact over the past 3 ½ seasons they’ve managed just 7 in 78 games – only the Dragons and Zebre have fewer). For these reasons the black and red’s best chance of being in contention for a playoff spot is likely to involve 7 wins and 3 bonus points rather than 6 wins and 7 bonus points.

Achieving 7 wins when only 4 of their remaining matches are at home is going to be a big ask but this is the level that needs to be reached if Edinburgh want to be able to compete for the title:

The wins and try bonus points noted above would take Edinburgh to 62 points. That leaves them to find one more win and a losing bonus point from 4 games away from home against former champions. None of these locations have been happy hunting grounds for the Gunners as can be seen here:

If Alan Solomons’ men are looking to take the next step in their evolution then picking up at least one win a season and regularly collecting bonus points at these sort of venues becomes almost essential.

Edinburgh face a very tough task to back up a decent first half of the season. In order to gather sufficient points to challenge for the playoffs they are going to need consistency at home; ruthlessness against the teams in the bottom half of the table; and also some inspiration when they face off with other playoff contenders. The risk is, with the table so congested, that even the secondary target of staying in the top 6 (and therefore guaranteeing qualification for the Champions Cup) may require almost the same level of points to be accrued. There is little leeway for the 1872 Cup holders in their quest to continue their improvement under Alan Solomons.