Here’s the latest update to the official On Top Of The Moon projected Pro 12 table. Things have moved on apace since just before Round 16 when the first set of projections were published. Leinster continue to look like the most likely side to top the table but still need to come through some key clashes. The original prediction of 5 teams clustered on 67-69 points behind the men from Dublin has been undone by the (continued) good form of Connacht and Scarlets and slip ups from both Ulster and Munster that may prove extremely costly come the season’s end. Glasgow’s games in hand continue to unwind, leaving them in a strong position to challenge for the playoffs.

Here’s the original On Top Of The Moon projected final Pro 12 table – prior to Round 16 (click for large version):

And here’s the updated version prior to Round 19 (click for large version): 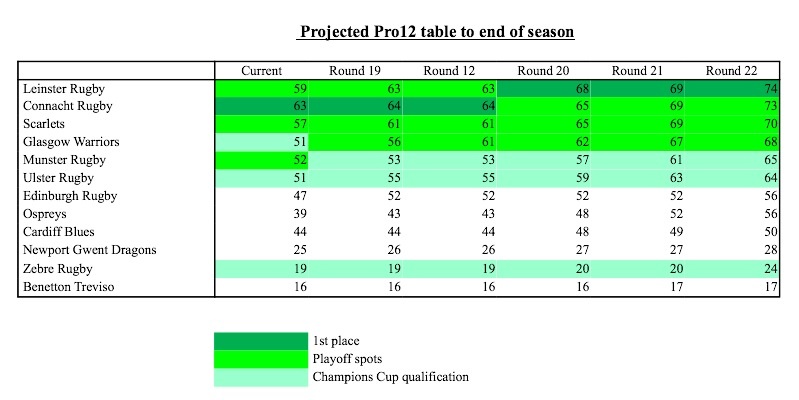 The key results that have impacted the final make-up of the table were:

With both Edinburgh and the Ospreys now looking unlikely to threaten the playoff spots there are 6 sides battling for 4 places in the post-season. This should lead to some titanic clashes over the coming weeks:

The table above includes the OTOTM prediction for match points and also the previous margins of victory for these fixtures in the Pro 12 (positive numbers for home wins, negative numbers for away wins). The forecast points are all based on the OTOTM statistical model – with the exception of Connacht v Glasgow where history suggests an away victory but current form means a home win is the slight favourite.

With the possibility that the top 4 teams could go into the last weekend on 69, 69, 69 and 67 points it looks like the composition of the semi-finals will be going to the wire and the evening of Saturday the 7th of May will see an awful lot of searching for cheap travel deals and accommodation for the fans of 2 of these sides…