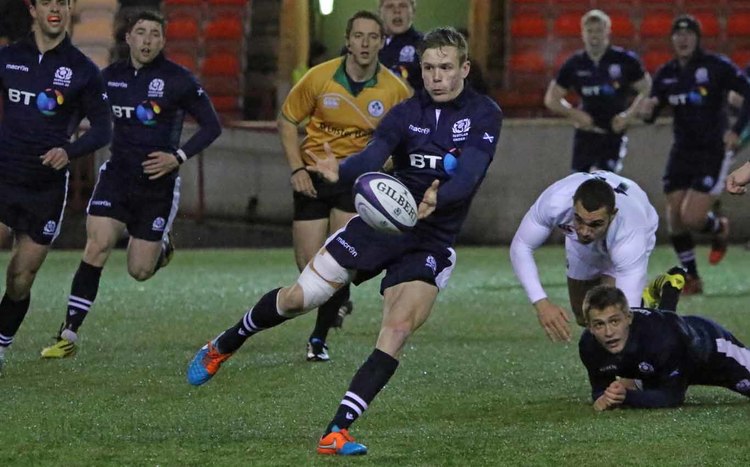 On 29th June 2015 the first intake of players to the newly inaugurated Scottish Rugby Academy were announced. There were 28 names on the list of those at the most advanced Stage 3 level. So two seasons down the line and with contracts having been awarded for 2017/18 how have the SRA: First Class got on?

20 players from that initial group have signed professional contracts with a first or second tier club. In fact adding in the 2 other subsequent SRA graduates who are with the pro teams full-time this season there’s not far off a complete matchday squad of players who have been part of the Academy setup.

(Darcy Graham is with Edinburgh – he was a Stage 2 player on that first intake before moving up a level and was joined at Stage 3 in 2016/17 by Jamie Bhatti, who is playing for Glasgow in 2017/18).

Current and former Academy players combined for more than 12,000 minutes of playing time in the first or second tier during 2016/17:

The SRA has already seen its first full men’s caps in the compact shapes of Ali Price and Nick Grigg.

Here is a team made up of those who have signed full-time professional terms with a first or second tier club:

(1) Played with London Scottish for the last 2 seasons. Will be with Scotland 7s for 2017/18.
(2) Signed his first pro contract with Edinburgh but moved to Bristol for the 2017/18 campaign.
(3) Leeds Carnegie
(4) Newcastle Falcons

The side would certainly not be short of locks and centres but there’s maybe a bit of a gap in a couple of positions with some crossover in terms of skillset – stand off and full back. Will Jason Baggott (Edinburgh) and Josh Henderson (Glasgow – but currently on loan at French side Stade Nicois) who are both Stage 3 for 2017/18 be among the players to help fill those gaps?

There were no women at Stage 3 in the first intake of the SRA but within a year Jade Konkel had stepped up to that level, becoming Scotland’s first ever full-time female player. Since then Jade, Chloe Rollie and Lisa Thomson have all graduated from the Academy to play professionally for Lille Metropole Rugby Club Villeneuvois in France. Sarah Law was recently announced as the fourth Scottish full-timer and she will be a Stage 3 player in the Edinburgh branch of the Academy for 2017/18.

Picture courtesy of Adrian Henry for the excellent Rugby People.