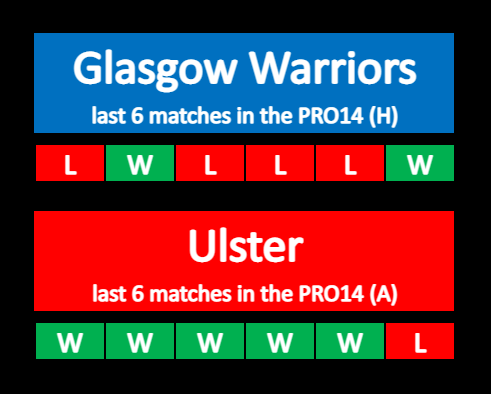 There’s a debut in line for James Scott who has sneaked in on loan from the other Warriors of Worcester. James will become Warrior number 322 if he is brought on against Ulster. The big lock is one of 5 players from outwith Glasgow’s main squad involved in the 23 on Friday night alongside fellow loanee TJ Ioane; Scotland 7s’ Robbie Fergusson and Academy players Ross Thompson and Ollie Smith.

Johnny Matthews will make his first start for the club with his current form sufficiently strong to see him picked in the number 2 jersey ahead of capped internationals Grant Stewart and Mesu Dolokoto.

While the high point of his season might be his role as Adam Hastings’ hairstyling icon there have been plenty of other memorable moments for Oli Kebble. The former Stormer made his Scotland debut against Georgia in October and has been an ever present for the national side in their other 6 matches since then.

While every Warriors’ fan will be proud to see OIi pull on the dark blue it will be equally as satisfying to see him run out in Glasgow colours for just the 4th time this season. Anyone taking on a side coached by Dan McFarland needs a solid platform up front if they are going to compete. Oli’s role in the scrum and around the park will be crucial to the Warriors’ chances of turning over a side who are flying high in the PRO14.

Mr Blain is pretty keen on a card or two, as he demonstrated in his last outing at Scotstoun. During an 1872 Cup match he dished out 5 yellow cards (2 to Glasgow and 3 to Edinburgh). Best behaviour is probably required on Friday night!