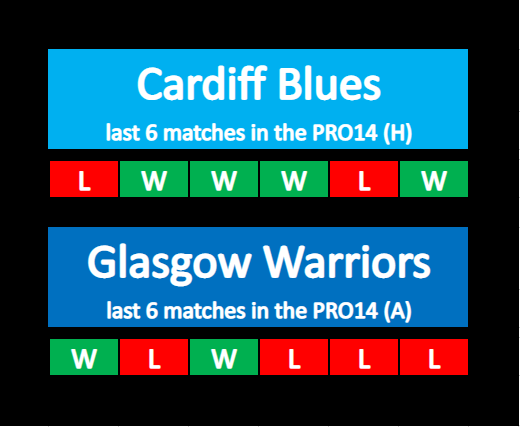 A big, big welcome back to Lee Jones. At the start of the 2018/19 season, Lee was well on his way to becoming a Warrior Centurion, having clocked up 80 matches since moving along the M8 from Edinburgh. Injuries have put a hard stop on his Glasgow career in recent times and the winger has made just 2 appearances for the club (totalling 84 minutes of game time) in a little over 2 years. Here’s hoping for a flying re-start for the former Scotland 7s star!

Both Peter Horne and Ryan Wilson will play their 177th games for the Warriors, putting them 3rd equal all-time alongside Graeme Morrison. With a couple of forwards in first and second (Rob Harley makes his 238th appearance on Sunday night; Chris Fusaro – 183 matches) that means Pete is now equal top as the record holder for games played by a Glasgow back.

His return to action last week may have been brief but there’s plenty of reasons to expect a big impact from the shortest player in the Glasgow line-up, Nick Grigg. Since breaking through in 2016-17, Squiggsy has been one of the most consistent performers in the Warriors’ backline. He’s a player who uses his strength and low centre of gravity to break a remarkable amount of tackles and get the team on the front foot.

On the defensive side he leads the linespeed with low chop tackles. He’s pretty handy over the ball too, which can be a real benefit at rucks in the wide areas that the back row might not make it to. It’s going forward that is his real strength though and If the Warriors’ attack is to spark at Rodney Parade then Nick will need to be one of the primary contributors.

Glasgow away to Cardiff Blues in the PRO12/14 era:

Previous match-up away to Cardiff Blues:

Nobody took charge of more PRO14 fixtures last season than Mr Murphy. The former scrum half (now there’s a position that was born to referee!) has become a regular as the league looks to develop a younger cadre of refs to take over from some of the more experienced officials. This will be the second time this season that the Irish whistler has been the man in the middle for a Glasgow game having also filled the role for the club’s only win of the campaign so far – versus Scarlets at Scotstoun.